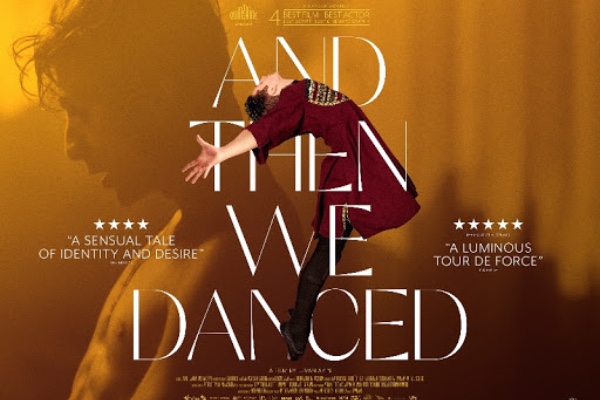 And Then We Danced

Swedish filmmaker Levan Akin has created a storyline which is at once beautifully emotional and sadly inevitable.

The main character Merab has a mesmerising smile and is a highly talented dancer desperate toy move up from the ensemble to a starring role in the ultra-conservative Georgian state dance company.

But there is only one vacancy and suddenly he has a rival in the shape of the rather distant new dancer on the block – Irakl.  The film moves at what sometimes seems an annoyingly slow pace, and the obvious love link between the two men evolves with all the tentative hesitation of forbidden romance.

The irony is that the repertoire includes duet dances between two men which are frantic, muscular and heavily homoerotic.

What Akin achieves is a level of intimacy which is highly personal – largely through hand held camera shots reminiscent of  on – the -hoof documentary making.  The director/writer worked for a long gestation period of research and rehearsal and improvisation with the lead actor, whose film debut this is. It certainly pays off through the sincerity and openness of the performance.

The film has had a difficult journey  -made largely secretly due to official opposition and when released was treated to violent protests. It’s gone on to win awards across Europe and quite rightly .

Levan Gelbakhiani as Merab gives a wonderfully clear and engaging performance and his recent new comer award I’m sure will be the first of many. And Bachi Valishvili is equally powerful and sinuous as Irakl –  the source of Merab’s confusion about his sexuality

The film’s climax – which I won’t spoil for you is both visually stunning and a solid act of defiance by a character who is learning to be reconciled to the ambiguities of a queer existence.

And Then We Danced is now on release from Peccadillo Pictures, you can watch this superb film at Lewes Depot and also Brighton’s independent cinemas.