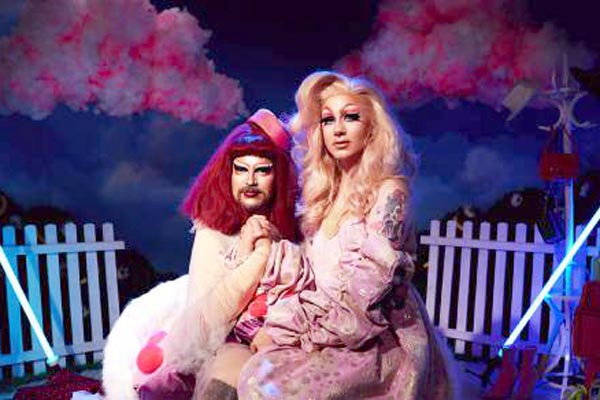 Have you ever had a problem and thought “if only I could get two drag queens to give me some semi-useful advice, I could sort this out immediately?”

WELL then, you’re in luck! Dragony Aunts is Comedy Central UK’s new online short centred around Candy Warhol and Crystal Rasmussen. Each episode is a bite-size portion of advice and comedy with new guests each week.

The episodes will only be available online through Comedy Central UK’s Youtube and Facebook channels and are a part of their new wave of short-form content.

With the advent of Rupaul’s Drag Race and the upcoming Drag Race UK, Comedy Central has chosen to capitalise on the current mainstream popularity of drag with this new show. The queens and hosts of the show, Candy and Crystal, offer their guests’ either genuine or nonsensical advice with whatever problems they may have.

On the preview episode I was treated to, the comedian/musician Jordan Gray asked to be made just 10% more fabulous. Of course, drag queens are terrible at math so Jordan ended up looking more like Big Bird than anything else.

The length of each episode keeps each segment moving at a brisk pace, which is perfect for both this format and the idea of the show. There is a good mixture of punchlines and advice throughout each episode, which keeps it from becoming too soppy while also providing a warm message of self-love. The queens clearly have the mission of loving yourself at the core of their advice, but it wouldn’t be a drag queen show without some cutting remarks here and there, and the balance of this is done just right.

However, Dragony Aunts isn’t all about advice for their guests. At the end of the episode I saw, Crystal performed an original song about (literally) loving what’s inside of you while Candy provided what can only be described as breathtaking choreography with a glittery streamer. For me, this was the funniest part of the episode. I don’t know if each episode will end in a song similar to this one, but the show would definitely benefit from a bite-size comedy number to cap each one off.

While drag seems to only be gaining in mainstream popularity as each year passes, it’s still a huge mark of success when drag queens get their own show.

Dragony Aunts is a fun, new format for a drag show and the short form nature of it keeps it entertaining and fresh. If you want a little giggle at the end of your work week, or maybe even a sliver of helpful advice, Dragony Aunts will premiere online on Comedy Central UK’s Youtube and Facebook channels every Friday, premiering July 5.