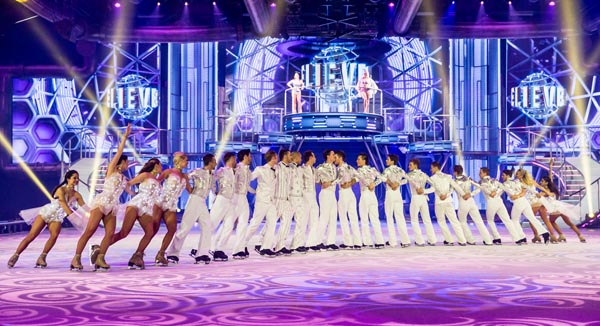 The first Holiday on Ice production I can remember to have an actual storyline, Believe is a modern-day take on Romeo and Juliet.

Creative director and choreographer Christopher Dean has created a completely different skating experience that combines the classic artistry you expect from a Torvill and Dean dance number with the most up to date high tech production values.

The music score produced by composer Stephen Emmer is world-class as are the video graphics on the back screen produced by Michael Al-Far. Paco Mispelters lighting design is the best we have seen at any Holiday on Ice show at the Brighton Centre over the years as is the set, designed by Luc Peumans.

This years production is more an ensemble piece than usual. The principals are all very impressive especially the Russian pair, Evgenii Belianin with the beautiful Daria Perminova and the Canadian pair of Andrew Buchanan and his wife Robin Johnstone who play the two romantic leads and beautifully capture the romantic chemistry of the choreography perfectly.

The opening scene is at times quite homoerotic, set in an underworld factory where men do what men do in their tight jeans and tight tank tops. Not a female skater in sight. Dean captures the mood with very stylised choreography for the male robot drone skaters which is extremely effective. Slowly the traditional camper Holiday on Ice influences infiltrate the production as do female skaters who inhabit and enjoy life in the overworld.

Highlights include; a pole dance number performed through a veil of dancing waters cascading from the roof of the Brighton Centre. A chorus line of male skaters from the underworld who dance like robots in total darkness. Their costumes are covered with different coloured lights, which creates a stunning effect through the dark. Finally two skaters performed an aerial duet on two red silks suspended from the ceiling, to the music of Ravel’s Bolero the music which won Dean his Olympic Gold Ice Skating medal at the Sarajevo Winter Games in 1984.

The finale arrives in true traditional Holiday on Ice style with the skaters resplendent in white, their costumes lit with little fairy lights. Was there really going to be no wheel an essential part of every Holiday on Ice Show? Christopher Dean was playing with us and had saved the wheel to be part of the finale, the best finale I can remember seeing in any Holiday On Ice show in the last 30 years. Flying skaters with fireworks in their boots just added to the overall wow factor of the unfolding spectacle.

I say it every year, Holiday on Ice is fantastic entertainment and provides a wonderful start to the new year. It is entertainment on a grand scale and deserves to receive support from everyone that loves spectacular live theatrical events.

Regular visitors to Holiday on Ice will either love or hate this show depending on their views of how this genre needs developing to move forward and survive. I loved it!  The producers have finally found a modern concept that could attract a younger audience to venues all over Europe where this show will play.

You still have the chance to see this show on Friday, Saturday and Sunday.