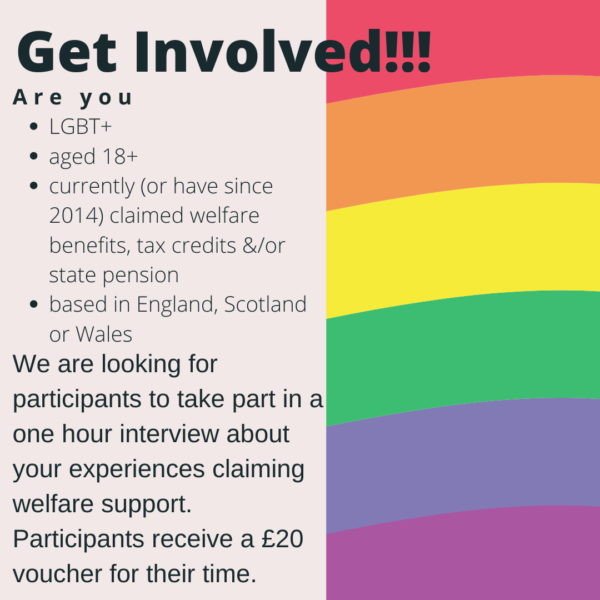 A group of researchers are currently recruiting participants for a LGBTQ+ Welfare and Assets study, which is a joint project between University of Stirling, University of Nottingham, Sheffield Hallam University, and Vanderbilt University in the United States.

The researchers are looking to improve the experiences of LGBTQ+ people having to deal with the benefits system.

They are currently looking for volunteers who are:

• LGBTQ+ (including but not limited to lesbian, gay, bisexual and/or trans people)
• Aged 18+
• Claiming (or have claimed in the last eight years) welfare benefits*, tax credits and/or a state pension
• Based in England, Scotland or Wales.

Eleanor Formby from Sheffield Hallam University said: “We are very keen to hear from as wide a range of LGBTQ+ people as possible, especially those who are potentially multiply marginalised, e.g. people of colour/BAME folk, who are often less represented in existing LGBTQ+ research.”

The researchers are able to offer a £20 voucher to anyone taking part in an interview. The conversation will probably last around an hour and can be at a time and (online or physical) place of your choice.

If you’d like to take part, or have any questions, get in touch with Eleanor in the first instance: e.formby@shu.ac.uk or on Twitter @eleanorformby

* Welfare benefits can be any benefit you have received from the Department for Work and Pensions, Job Centre Plus, your local council, or Social Security Scotland.