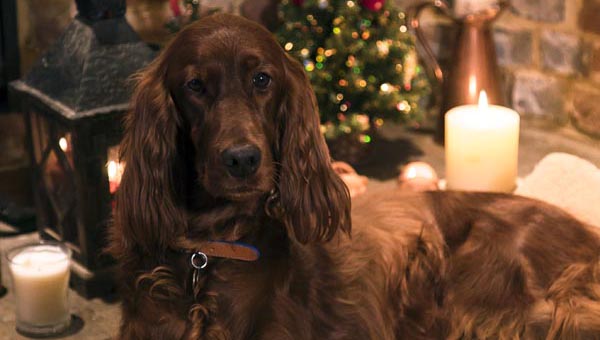 Viewers crown the RSPCA’s video their ‘favourite ad this Christmas’ with 180k views on YouTube.

The RSPCA’s festive video, Give A Little Love, which shows a dog finding her forever home and passing on the love to other rescue animals, features real life RSPCA success story dog, Bridie.

The video, launched on December 6 has already been viewed over 180,000 times on social media, sparking thousands of shares and more than 10,000 comments and reactions.

The short film was made by the charity’s broadcast team and filmed at two RSPCA centres in November. The video features several staff members and a number of rescued animals currently looking for homes, aiming to highlight those animals who have been rescued from cruelty and neglect.

Making her film debut in the starring role is real life RSPCA rescue dog, Irish Setter Bridie, She attends local training classes at Billingshurst Dog Training Club but otherwise has had no special preparation for her role, illustrating the potential that so many dogs awaiting adoption in RSPCA centres can offer their new owners.

Amie Hill, video producer said: “We are absolutely amazed at how popular our video has been, and are just so happy that the public has taken Bridie’s story into their hearts – some on Facebook have said it’s their favourite ad this Christmas. We wanted to make a heartwarming Christmas video for our supporters to enjoy, and to have beautiful Bridie star in the film is fantastic, particularly given her own story.

“We are very proud that everyone involved with the film works for the RSPCA at the Horsham head office, from the production team of three, to the staff appearing in the film – even the singer who wrote and performs the song. And, of course, all the animals featured are genuine RSPCA rescues.”

Bridie was discovered in 2014 with thirteen other fully-grown Irish Setter dogs, crammed into squalid puppy cages kept between the filthy kitchen, bathroom and the garden shed at the home of a dog breeder in some of the worst conditions the inspector had ever seen. The front of the shed was barricaded shut with wooden pallets and posts, and the dogs had no food, water or bedding.

Bridie was covered in faeces, had various untreated injuries and her coat was matted and filthy, a far cry from her new life with owner Dr Julia Wrathall, who rehomed Bridie.

Julia, who is Chief Scientific Officer at the RSPCA, and also features in the video as Bridie’s owner said: “Bridie is a fabulous example of how, when shown a little love, animals can be completely transformed, leaving behind the past and giving so much back to us. When she was first rescued, Bridie was terrified of the outside world and very nervous and skittish. But she has blossomed into a fantastic, friendly, affectionate, and happy dog. She is a testament both to the inspectors, vets and animal centre staff who rescued and cared for her, and to her own resilience and willingness to give life – and humans – a second chance.

“Her wonderfully positive nature has shone through, despite the horrors of her former life. I am delighted that Bridie has featured in this video. She is so inspiring and I feel really privileged to have her in my life.”

The original song featured on the video, called Give A Little Love, comes from UK songwriters Alistair Gavan and Lucy Ellie Cooper – who allowed the charity to use the song free of charge. It was both written and performed by Alistair, a musician and record producer from Brighton and Sussex-based country singer Lucy, who also works for the charity.

The short festive film forms part of the RSPCA Love Animals, Hate Cruelty Campaign. Last winter the charity received one call every four minutes about neglected animals, and this year expects to take in somewhere in the region of 19,000 animals.

To support the campaign, share the story on social media.