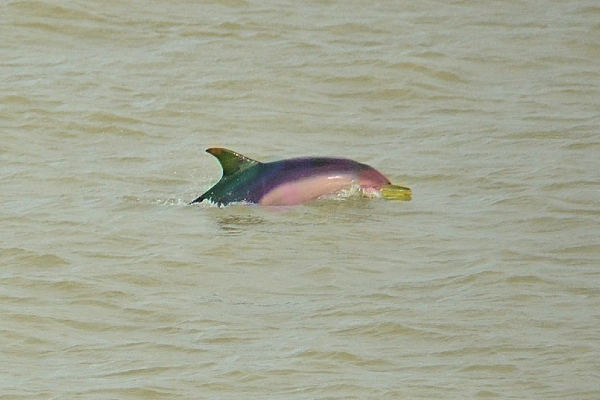 A pod of Rainbow Dolphins has been spotted out to sea close to the West Pier off Brighton Beach this week.  Dr April Phouul of the Cetacean Underwater Nautical Tracking Society said that although its highly uncommon to see these common rainbow dolphins so far north in the English Channel that the sightings are not that unusual, they often get reporting of sightings from the ferry captains at Newhaven although it is unusual to have them come so close to shore.

Dr Phouul, an internationality recognised expert said this time of the year the sea is unseasonably warm, coupled with very low spring tides caused by the recent full moon and the jellyfish the dolphins feed on have been colonising the warmer Sussex waters. It’s the bright pink colouration of the jellyfish that produces such an amazing natural rainbow colouring in the skins of the dolphins combined with an increase in their hormones due to their early April breeding season. Rainbow Dolphins form same sex pairs to look after the young in their pod, this behaviour is very common in the animal world.

The Rainbow Dolphins have been seen for the last three days enjoying  the very low tides just around the West Pier which is bringing them into contact with people who are exploring the exposed foreshore.

Scene magazine reached out to Professor Uni Korn, marine biologist at Sussex University to explain what people should do it they come across these marvellous creatures whilst swimming or paddling out. Professor Korn warned the public that these were wild animals and were not to be approached, they are highly territorial and if they have young with them will attack. Prof Korn said ‘Beware these Rainbows are fierce!!  There have been recorded attacks by Rainbow Dolphins on people on paddle boards and people using highly coloured inflatables.”

Professor Korn said only last year two people who had paddled out from a beach in Devon on a large inflatable flamingo were attacked by a  pod of fierce Rainbow Dolphins who surrounded the scared people hissing loudly and slapping their tails on the water.  Professor Korn said if you find yourself cornered by a pod of these fierce sea mammals then the best defence is to squeal as loud and high pitched as you can, as this can confuse and scare them off.

You can see an amazing film of the pod of Rainbow Dolphins captured by local fisherman just off the coast of Brighton here.

Dr Phouul said if anyone is lucky enough to catch sight or film any of the Rainbow Dolphins to email them on April1st@phouul.com