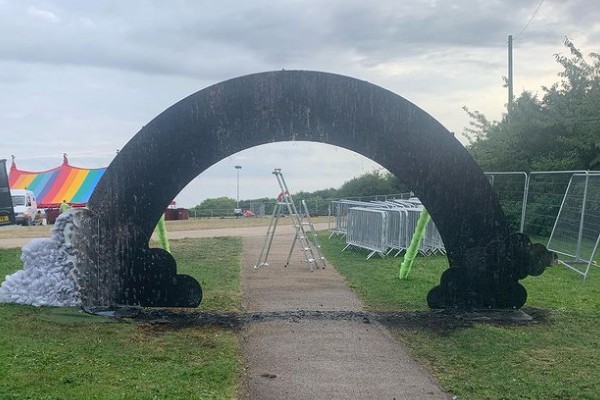 A rainbow flower archway, set up in honour of Milton Keynes Pride on September 11, has been burned down in what is thought to be arson. The arch was found vandalised on September 13, with “deeply saddened” Pride organisers sharing the news on social media: “The arch had been fenced and secured which means that the incident was undertaken on purpose.”

The post continued: “Sadly this incident shows that there is still so much work to be done within MK in regards to the Homophobia, Lesphobia, Transphobia and other forms of discrimination the LGBTQ+ community face.” My Milton Keynes, the community improvement organisation that donated the rainbow arch for Pride, also expressed its sorrow on Instagram, saying: “We are shocked and saddened to see that our beautiful rainbow flower arch has been destroyed by vandals.”

However, it affirmed its support for the LGBTQ+ community, adding: “We will not let people like this hurt us and will ALWAYS CHOOSE LOVE.” One social media user said that the incident is an example of why Pride is still “important”, while Milton Keynes MP Ben Everitt tweeted: “Absolutely awful to see this after such a wonderful, positive event full of community and togetherness on Saturday.”