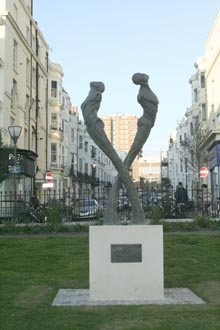 The Rainbow Fund announced today the outcome of its autumn funding round, distributing £31,530 to local LGBT and HIV projects.

Collectively the funding will provide the local LGBT community sector with a significant financial boost at a time when many groups are under financial pressure. The grants are independently administered by the Sussex Community Foundation, giving local donors assurance that the money they contribute will go to local good causes on a needs-led basis.

“This presents our largest ever investment in local LGBT/HIV groups to-date. We are delighted to continue some of the projects we have supported over recent years, such as Lunch Positive and MindOut, to help create a sustainable income for them, and we are very excited to be addressing some of the newer needs emerging from the community.

“Allsorts is a good example of how our funding can make a significant impact on a specific group of beneficiaries and we are delighted to be supporting the city’s first ever Trans Youth Worker. This is a ground-breaking initiative and exactly the kind of innovative and targeted approach that we like to get involved with. This funding will make a significant difference in the lives of these teenagers.

“Crime and safety issues are at the very top of the agenda locally and we are pleased to be able to fund a new independent advocate post for the Community Safety Forum. We are glad to be supporting the Forum’s work in turning around crime issues in the St James’s Street area.

“We can only do this because of the people who give us the money to do so – every pound that is given is making a real difference. I would like to thank the various fundraising activities and groups who have made this possible.  This includes our link-up with Pride and we are grateful to Revenge owners Robert Webb and Michael Deol for this partnership.

“Fundraising included Pride’s tickets sales of £1 per ticket sold at this year’s successful Pride event which reflects the amount given out in the grants round so that people can easily see where their contribution via the tickets sales is being used.”

Michael Deol, owner of Revenge and Director of Pride, said:

“We are delighted to link up with our charity partners, the Rainbow Fund, to ensure the maximum charitable benefit from Pride for the city’s LGBT and HIV communities. This list of grants will make a huge difference for local people who rely on the voluntary sector for support. Not only have we turned Pride around, we have ensured that it makes a significant contribution to the local LGBT community too.

“We are particularly keen to see money targeted to tackle community safety issues, following the worrying increase in attacks in the St James’s Street area. We hope that this investment will help to turn the tide on this issue.”

In addition, funding is being provided to clean and maintain the AIDS Memorial, and improve signage in New Steine Gardens. This is the first time since its 2009 unveiling that funding has been allocated for the memorial, and follows vandalism during the Pride Street Party weekend.

The grants panel has also agreed a second round of funding in May, so more Rainbow Fund money will be distributed then, the first time the Fund has been able to finance two application rounds in a twelve months period.

The Rainbow Fund has no salaries to pay, no expenses, no office costs and so all our activists can wear the same ‘Volunteer’ badge at events. Its only overhead relates to the safe receipt and fair distribution of grants by the Sussex Community Foundation, its professional advisers.

The Rainbow Fund would like to thank the following groups and businesses for their support over the Pride period, with money received directly from the following:

In addition, a £40,000 restricted donation from Brighton Pride was ring fenced by the grants committee for Pride 2013, to be determined in January 2013 once the Council has selected the delivery organisation for next years event.

Grants will be distributed at an award giving ceremony on January 4, 2013.