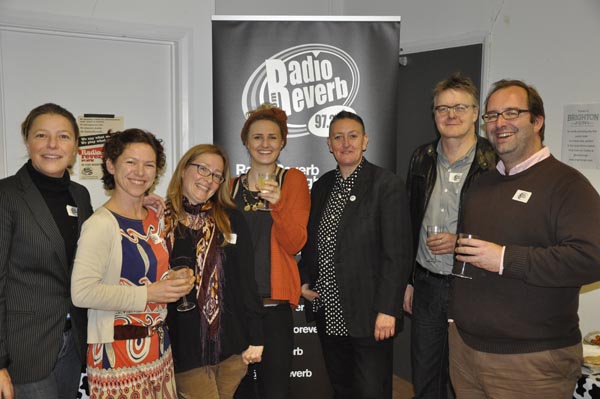 RadioReverb invited people to check out their new studios in Brighton last month, to have a drink, a chat and see their new facilities.

RADIOREVERB  is one of the largest voluntary organisation in Brighton with more than 100 volunteers working on programmes and behind the scenes. They have no paid staff to manage or run the station.

Melita Dennett RadioReverb chair said: “We are dedicated to making the kind of radio you won’t hear anywhere else on the airwaves in Brighton & Hove not only with music but the way we do our speech content.

“We don’t have adverts or playlists and want our presenters and contributors to sound like real people, not stereotypes or cliches.”

RadioReverb broadcasts throughout Brighton & Hove and westward through Worthing, Littlehampton, and Chichester. They estimate they have at least 70,000 listeners who are adults, mostly professionals, listen to Radio 4 and BBC 6 Music and are engaged socially, culturally and politically with what’s happening in Brighton & Hove,

Kathy Caton, is the presenter of Out in Brighton, the city’s only LGBT show on FM. Kathy was named as one of the UK’s 100 most influential LGBT people in this years Independent on Sunday Rainbow List, up from 81 last year to number 45 in 2014. She has also recently been presented with a MindOut award for her broadcast coverage of mental health issues in the LGBT community.

Kathy along with Claire Parker, producer and presenter of Time 4 T, the UK’s first and possibly only regular Transgender show on FM, were both finalists in the 2014 Ultimate Planet Awards – LBQ community awards for Radio Show of the Year.

RadioReverb was recently shortlisted in the Radio Production Awards for the Production Hero Award alongside some major national players and they are now an approved Creative Skillset training provider for the South East and offer courses tailored to specific groups’ needs and also for the wider community.

Recently they have been awarded a grant to employ Kathy Caton, as a part-time training manager and they have now started running training workshops, aimed both at people in the wider community, and also for specific groups such as people with mental health issues, LGBT people, and others whose voices and life experiences are traditionally marginalised from mainstream media.

RadioReverb is alway looking for financial support and promise that every penny goes back into the running of the station. There are no shareholders and at the moment nobody is paid a penny to produce programmes or run the station.