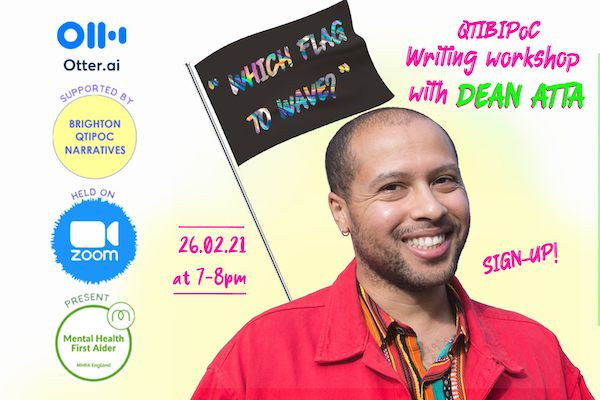 Which Flag to Wave, a FREE writing workshop that will use flags as a way of talking about pride in various forms, including sexuality and nationality, is to be hosted by QTIPoC Narratives on Zoom on Friday, February 26 from 7pm. Although the workshop finishes at 8pm, two mental health first aiders will stay until 8.30pm if anyone requires 1-2-1 listening support.
Men
This event, led by Dean Atta and open to all QTIBIPoC (queer, trans, intersex, black, indigenous, people of colour) community members who are 18+ , marks the first of QTIPoC Narratives Collective‘s monthly Alternative Mental Health Spaces and is an opportunity to submit your piece to an online group zine and receive £10 via gift voucher or bank transfer.

Dean Atta was named as one of the most influential LGBTQ+ people in the UK by the Independent on Sunday. His debut poetry collection, I Am Nobody’s Nigger, was shortlisted for the Polari First Book Prize. He has a Philosophy and English BA from the University of Sussex and a Writer/Teacher MA from Goldsmiths, University of London. His debut novel, The Black Flamingo, was awarded the 2020 Stonewall Book Award, and shortlisted for the CILIP Carnegie Medal, YA Book Prize and Jhalak Prize.
To book CLICK HERE. If you are unable to attend after booking, email qtipocnarratives@gmail.com so that they can offer your space to another community member. Priority will be given to East Sussex-based QTIBIPoC community members between January 31 and February 10 so only sign up if you are both QTIBIPoC and from East Sussex, thereafter booking will be open to all QTIBIPoC.
Accessibility: Live caption will be offered via Otter