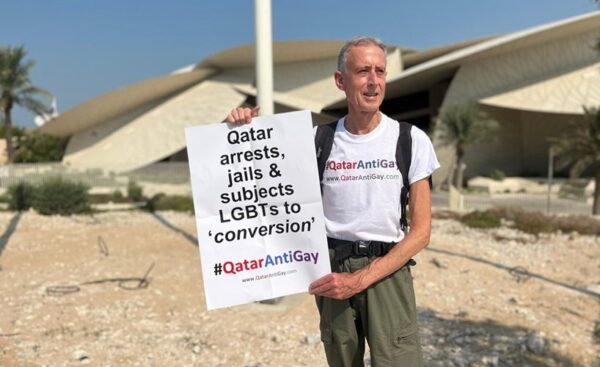 Just a short distance from where the football World Cup final will be played this Sunday is one of Qatar’s secret alleged gay conversion centres – the Wifaq Family Consulting Centre, which is located in Lusail City.

“According to Qataris, LGBT+ people can be detained there against their will and subjected to abusive so-called treatments in a bid to turn them straight. One young gay Qatari told me he had been put though a gay conversion programme. He described it as a form of ‘psychological and religious brainwashing.’ He was so traumatised by the experience, and the pervasive homophobia that he had experienced in Qatar, that he later committed suicide,” said Peter Tatchell, director of human rights organisation the Peter Tatchell Foundation.

The existence of these gay conversion centres has been independently corroborated by a Human Rights Watch investigation.

“The gay conversion programmes are reportedly funded by the Qatar Government via the Qatar Foundation and fall under the remit of the Protection and Social Rehabilitation Centre. Its services include “psychological and social rehabilitation” and referrals to Wifaq.

“In addition, families, schools, religious leaders and courts can refer individuals to Wifaq. Based on Islamic principles, it includes “spiritual guidance” and deals with a range of issues including divorce, child custody and family mediation. But I am told that hidden within its many services are conversion programmes designed to reform LGBTs by changing their sexual orientation or gender identity.

“Wifaq primarily deals with issues around family disputes. However, the website also refers to its “guidance and counselling service”, “parental care service” and “community awareness service”. Informants say that LGBT+ conversion falls within these services.

“One of the stated aims of the Wifaq centre is to “mitigate the effects of rapid changes in the family in Qatar and raise the efficiency of family members to manage a stable and cohesive family life”.

“This alludes to what they do to LGBT+ Qataris: ensure conformity to traditional Islamic family values.

”Standard treatment is weekly counselling and guidance sessions (one or two hours a week), involving psychological and religious persuasion and pressure.

“I have been told of examples of compulsory full-time residential treatment. Individuals are required to remain in a designated property under the supervision of the conversion centres. Whilst not prisons or formal detention centres, they are under guard and permission needs to be sought to leave.

“Some of these so-called “treatments” have been known to last for months.

“There are reports of people escaping the centres and fleeing the country,” said Mr Tatchell.