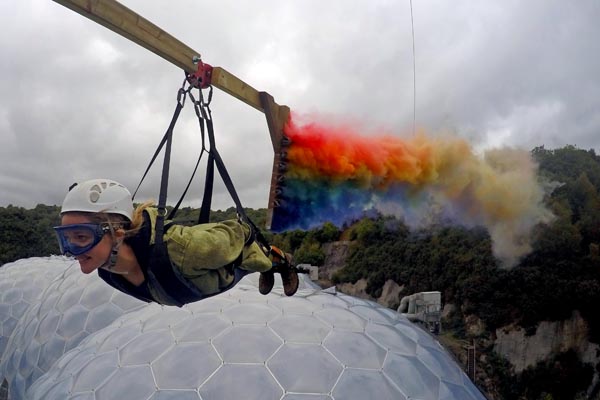 A grand celebration of LGBT+ culture takes place at the Eden Project on September 29 as Proud Eden returns to the West Country attraction.

THE special evening boasts a diverse line-up of top performers, acclaimed speakers and a cutting-edge exhibition.

It is being staged in association with Penguin Pride, Gay Times and supported by Cornwall Pride which campaigns for equality and diversity in the county.

Headlining Proud Eden on the Penguin Pride Stage in the Mediterranean Biome is actress, musician and LGBT+ activist Heather Peace.

Heather has appeared in London’s Burning, Ultimate Force, Lip Service and Waterloo Road and is also an accomplished singer with four jazz albums under her belt. She is a patron for Manchester Pride and the LGBT charity Stonewall.

Sharing the Proud Eden stages will be:

♦       Award-winning British poet and playwright Toby Campion whose poetry has been featured on BBC1, BBC Radio 4 and E4. Toby has performed across the UK and America and was winner of the Fifth Word Theatre award for Most Promising Playwright 2015. He will be hosting the Penguin Pride Stage.

♦       Singer-songwriter Hugo Valentine who will be performing his distinctive brand of piano-pop and bringing together influences from Elton John, Billy Joel, Bowie, Radiohead and more.

♦        Performance artist, theatre maker, poet and writer Travis Alabanza who has been noted by publications such as ID and MOBO Awards as one of the most prominent emerging queer artistic voices.

♦        Singer, songwriter and musician Kit Rice, one of the most exciting new vocalists to emerge from the UK R&B, dance and electronic music scenes.

♦         Singer and stand-up comic Paulus, who is taking the cabaret scene by storm, and will be compèring the Link Stage during Proud Eden.

♦        Young male vocalist and singer-songwriter Benji who at the age of 17 won acclaim from Simon Cowell for his songwriting abilities when he reached the six-chair challenge on ITV’s X Factor.

♦        Singer KYI who mixes soaring vocals with dirty baselines and was recently a judge on BBC 1’s All Together Now.

♦        The Trees, an all-female, four-part folk and country band from Plymouth with a varied repertoire.

Using a 19th century technique called wet plate collodion, the show entitled 0 1 serves as a platform for gender identities that fall outside or do not conform to a gender binary. Poignant photographic portraits are accompanied by sound recordings of the subjects’ interviews allowing for each model to express his or her own identity.

Alongside the gender identity exhibition is a series of rare archival interviews that reveal the personal stories behind the fight for LGBT+ equality.

Three decades ago writer Eric Marcus interviewed a hundred leaders, champions of and witnesses to the LGBT+ civil rights movement in the US.

Kate Francis, Eden’s programme producer, said: “Our first-ever Proud Eden last year was a fabulous celebration of LGBT+ arts and we are following that up with a scintillating bill on September 29 when so many diverse talents will grace our stage.”

Tickets for Proud Eden on September 29 are £10 per person.  The event runs from 6-11pm with last entry at 9pm. No general Eden Project admission ticket is required.

This event contains adult content so accompanied under-16s are welcome at the discretion of their parents.