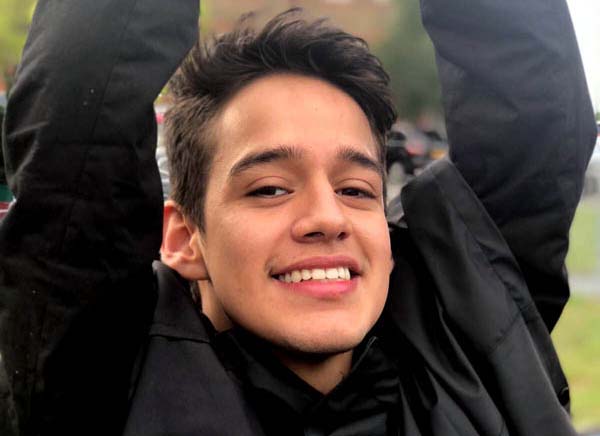 Latino film maker Pablo Herrera is passionate about increasing awareness in his films of some of the issues that face young gay men today.

Ravensbourne student Pablo Herrera is generating a lot of interest with his new short film Straight Jacket (We Can’t Stop) and is attracting attention from across the industry.

Born in Madrid to Ecuadorian parents, the 20-year-old moved to London with his mum when he was 16. He regularly spends time in Brighton and is being spoken about as an emerging young talent from within London’s Latin community.

With no budget available Pablo wrote and directed the five-minute film before editing it on his laptop. After viewing it recently the best-selling author and media commentator Matthew Todd tweeted that having made “a provocative and moving film”, Herrera has an “exciting and bright future”

Set to the music of Miley Cyrus’s, We Can’t Stop, it questions why so many young gay men are struggling with damaging mental health and behavioural problems at a time when there is full equality under the law and the gay community in the UK is celebrating the 50th anniversary of the decriminalisation of homosexuality in England and Wales.

Pablo says: “The UK was an amazing place to move to in my teens as London and Brighton have such exciting and vibrant gay communities and also offer the opportunity for so many different cultural experiences. I love going to theatre and film festivals or dancing at clubs like Exilio and Revenge but I have also become far more aware of the huge pressures young gay people are under, especially those who, like me, have come from other countries and cultures.

“The inspiration behind the film for my end of year project came when I read a book called Straight Jacket by Matthew Todd, the former editor of Attitude Magazine. It had a massive influence on me. It exposes the major self-destructive issues that affect many gay teenagers and provides analysis and information through stories that I could relate to.

“I wanted to make a short film set to We Can’t Stop in an attempt to raise awareness about the way bullying, depression, suicide, bulimia, homelessness, drug abuse and chemsex are very real problems for some young gay men who can lack the information or role models to help steer them through a period in their lives when they are often facing emotional turmoil and are vulnerable to exploitation, especially when Grindr, Tinder and all the other GPS linked dating apps make it easier and quicker than ever before to meet people.

“I’ve had to deal with some of those issues myself and it can be very frightening when you have no idea where to find advice and support, especially if you don’t have English as a first language. I think we are encouraged to wear a mask. To pretend that of course everything is ok, but inside we are not. That is what I wanted to draw attention to although I hadn’t expected to also end up being the main performer.

“I was planning to show a group of seven or eight gay friends who were happy and having a party in a place where they all felt safe and comfortable together and to then change the mood by introducing the various issues.”

Through someone he knew, Pablo arranged for a group of actors to help him and explain to them what he was trying to achieve.

Then, just a few days before they began filming, the guy who had provided the actors started sending Pablo messages insisting that he go and have sex with him, implying that he owed him, as he had helped him out.

Pablo continues: “I was shocked and had no option but to cancel them and step into one of the roles myself. He just didn’t get the irony of the situation or the fact that his behaviour was an example of the very problem I wanted to draw attention to!

“I’ve been very happy with the reaction and the kind comments to the film so far and am really pleased to have had messages from other young men saying they can empathise with it, because I also like films I can relate to or that teach me something.

“‘Life is Beautiful’, for example, helped me to understand that in life you experience a lot of pain and chaos but it is your choice about how you behave and react and to ensure that something good and positive can come out of it.

“A few months ago I saw Tangerine, a very raw and unusual comedy-drama about the life of a transsexual sex-worker in Hollywood. It was filmed on three i-phone 5 smart phones and proves that anyone now has the opportunity to make their own film and without needing a massive budget.

When he was younger, Pedro wasn’t a big fan of Pedro Almodovar, but recently he saw Volver and loved the way Almodovar created strong female working class characters who survived tough lives in their small town.

“Those women are seen as independent and determined and that inspired me and made me think of my Mum as she is very strong and was incredibly mature at a young age.

“She was just 16 when she became pregnant and her family threw her out of their home in Ecuador, leaving her to sleep in a park. She reacted by booking a flight to Spain where she had me and created a completely new life for herself so I feel a bond with Almodovar’s representation of characters like her.”

Although passionate about film Pablo had never thought of it as a career option until he took Media Studies at GCSE and won a prize for a charity video he filmed and edited.

“I realised this was what I wanted to do so I applied for the access course at Ravensbourne and have now been accepted onto their degree course.”

Pablo sees film also as a form of therapy for himself to express his feelings, frustrations and fears as well as his happiness, culture and ideas and whilst he knows he is young and has so much to learn, he is currently planning his first feature and looks forward to meeting and working with many interesting and creative people at university.

“To be a filmmaker is my dream and my ambition is simply to make more and make them better and to hope that people can connect with my films and be inspired by them, as I have by so many others.”