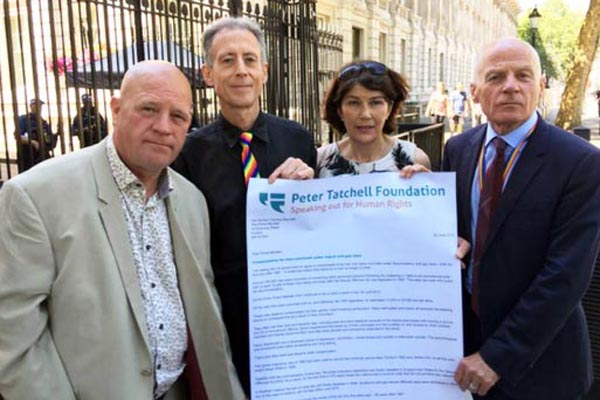 The Prime Minister, Theresa May, is being urged to “compensate living men who were convicted under discriminatory, anti-gay laws – both before and after 1967 – in instances where their behaviour is now no longer a crime.”

Rachel Barnes, the great-niece of Alan Turing, Lord Michael Cashman, Peter Tatchell and Stephen Close, who suffered for three decades after being convicted of a consenting gay offence in 1983 delivered the compensation request letter to the Prime Minister at 10 Downing Street yesterday (June 26).

Of the men who were convicted prior to, and following, the partial decriminalisation of homosexuality in 1967, an estimated 10,000 to 20,000 are still alive.

Rachel Barnes, Alan Turing’s great niece, said: “I am sure my great-uncle would want gay men who suffered like he did to receive compensation. They deserve recompense for unjust imprisonment and fines, physical hardship, mental trauma and often impoverishment. No money can ever reverse lost and damaged lives but as a symbolic gesture compensation is important and the right thing to do.”

Stephen Close convicted, aged 20, of consenting sex with another soldier in 1983 while in the Royal Fusiliers. said: “I was sentenced to six months in a military prison. I lost my job, home, income and pension. My homosexual conviction and ‘discharge with disgrace’ made it very difficult to get another job. I was near unemployable and was forced to do mediocre, low-paid jobs for three decades years. It caused me severe depression and ruined my life.”

Lord Michael Cashman added: “The government must now consider compensating those whose lives and careers were blighted and, in some cases, they still are.”

Peter Tatchell, Director of the Peter Tatchell Foundation, said: “These men deserve an apology and compensation for the terrible persecution they suffered. Many were jailed and nearly all endured devastating knock-on consequences. They often lost their jobs and became near unemployable and semi-destitute because of the stigma associated with having a conviction for a homosexual offence. Some experienced the break-up of their marriages and lost custody and access to their children. Families and friends disowned them and they were abused and sometimes assaulted in the street. Many descended into a downward spiral of depression, alcoholism, mental illness and suicide or attempted suicide. The psychological and emotional scars are devastating and long-lasting. That’s why they need and deserve state compensation.”

To read Peter Tatchell’s comprehensive, detailed exposure of the intensified police and judicial persecution of gay and bisexual men after 1967, click here: