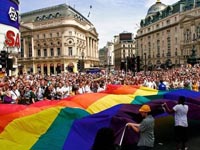 Pride in London has announced its line-up of entertainment for the big day on Saturday, June 29. Stages in Trafalgar Square and Soho will be offering a range of entertainment featuring rising and established stars of the music and cabaret scenes who have their hearts in the LGBT+ community.

At 1pm the massive Pride Parade – featuring over 150 groups will move off from Baker Street to make its way to Trafalgar Square. At the same time Trafalgar Square will burst into life as the London Gay Big Band takes to the stage.

The stage will be live until 8pm and performers include:

There will also be video messages and short films highlighting the achievements and campaigns of the LGBT+ community and some live speeches.

The cabaret Stage in Dean Street, close to Shaftesbury Avenue will present a rich mix of music, drag and queer performers between 4pm and 8pm. Rose Garden will get proceeding off to a roaring start as the first host before Lady M takes over for the second wave.

A joint Polari Magazine/London LGBT+ Community Pride team has developed a hugely diverse Programme showcasing the best that queer London has to offer, from cabaret to spoken word, art to photography.

To check out the busy calendar of Pride Arts CLICK HERE:

“Pride is a celebration of our achievements, a chance to campaign and a great moment for solidarity across the community.  Given the theme is ‘Love (and Marriage)’, if everyone participating in the Parade is the wedding cake then the entertainers we are announcing today are the icing on that cake; whether they are much loved favourites or up-and-coming talent they will top our celebration. With less than three weeks to go, I hope everyone is planning their Pride and making the most of the huge range of events that are available through the Pride Arts Programme. If you haven’t booked your tickets it’s not too late, see Clare Balding host An Audience with Martina Navratilova at our opening event on the June 23, have dinner alongside Boris Johnson on the June 25, join us at a special Book of Mormon performance on June 27, or soak up the atmosphere at Summer Rites Pride in the Park after the Parade on the June 29.  Every ticket sold for those events goes to help support Pride in London. ”

“The Pink Singers was established 30 years ago to appear at Pride and it’s an amazing feeling to be back singing in Trafalgar Square to celebrate how far we’ve all come. The final push to secure equal marriage will put extra passion in all of us this year and we’ll be singing our hearts out for you.”

“I can’t wait to share a stage with those beautiful boys from the London Gay Men’s Chorus, not to mention Zak Black and Josh James! Get down to the Dean Street stage where Lady M and I will be keeping the drag queens in order and presiding over some amazing talent – you won’t want to miss Jake Sims or Andi Fraggs.”