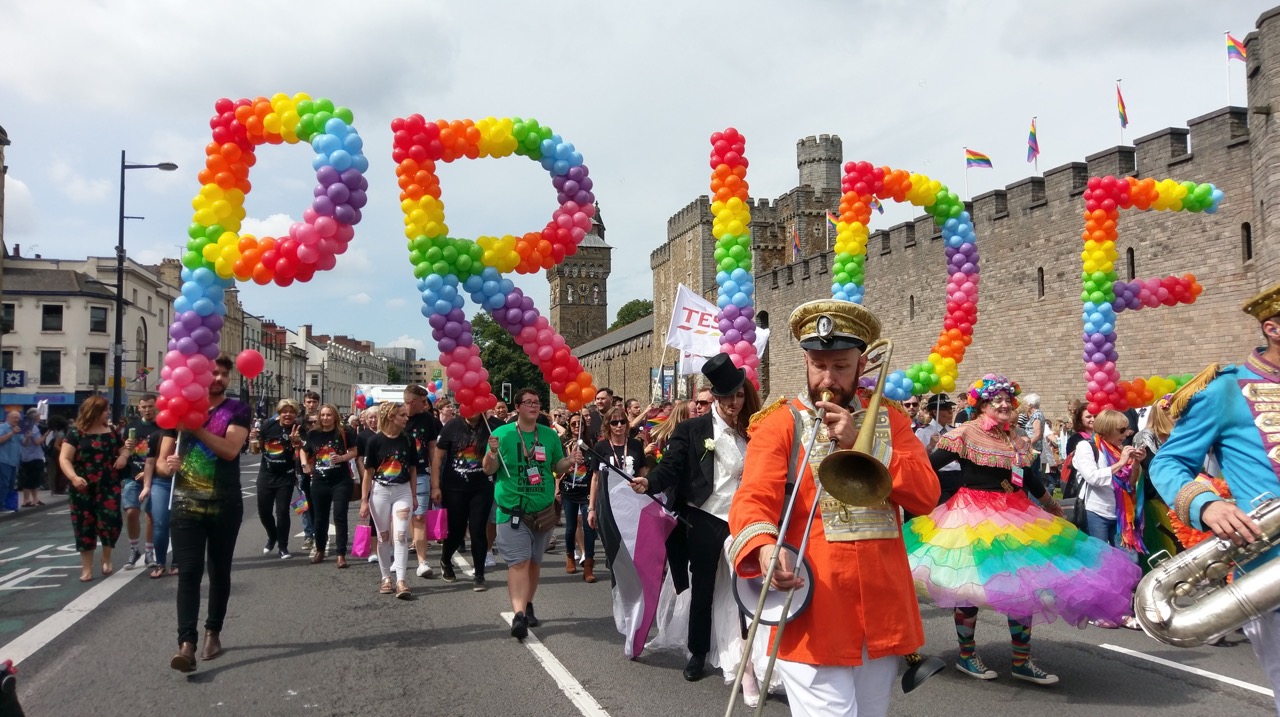 Pride Cymru 2017 and Welsh Pride came together in Cardiff City Centre for the The Big Weekend over the August Bank Holiday.

In glorious sunshine, in full glorious voice and with a thumping sense of fabulousness Pride Cymru launched on the evening of Friday, August 25 leading to a full rainbow dragon strewn weekend of wonderful LGBT+ inclusive events across the city.

The Pride Cymru parade, snaked and danced its way through the city centre, up and along Queens Street then down the full length of St Mary’s Street, the main city artery, past the historic Cardiff Castle, whose battlements were bestrewed with rainbow flags for the weekend and ending up outside City Hall Lawns where the main pride stage and events had been set up.

The Pride Cymru procession included all the main Welsh political parties showing their support for LGBT+ rights in Wales, Unions and public sector groups were very strong, trans, queer and activists groups were very well represented, (although a bit too far back in the march behind the corporate sponsors, who, as is becoming increasingly familiar, were well represented).

Banks, supermarkets (including Tesco who had pride of place at the start of the march for some corporate sponsorship reason, in front of ANY of the LGBT+ groups), building societies and a slew of sports groups, city LGBT venues and religious groups, all the emergency services, LGBT+ and Gay choirs, a hefty handsome Leathermen contingent and the gloriously welcome Cardiff Chapter of the sisters of Perpetual Indulgence, who blessed us all for being so outstanding!

The boys, girls, gender non-specific non binary people, parents, lovers, friends and allies of Wales’ LGBT+ community were out in strength too, marching with Pride with lots of placards showing commitment to Europe, to inclusiveness, to tolerance and working together to challenge bigotry and hate. The sun shone on the parade and the citizens of Cardiff lined the streets cheering, waving and being full-voiced in their support as only a Welsh crowd can.

Welsh Pride had combined with a big Cardiff event called ‘The Big Weekend’ to provide a whole bank holiday weekend of events, music, food and community stalls of a wide variety and one of the biggest and best funfairs I’ve ever seen at any Pride event, ever (and I love a good ride…..).

The ever-popular Big Weekend was always one of the key events in Cardiff’s calendar turning the City Hall Lawn and the streets surrounding the civic Centre into a carnival of colour, with fun fair rides, amusements and entertainment from some of the UK’s biggest names in music.

Now, Pride Cymru has brought back the Big Weekend reinventing it and making it bigger and better than ever before.  The Pride committee had secured more than £300,000 of fundraising to secure the event (and further Pride events in the future). Tickets were an astonishingly reasonable £2 per day, yes two whole British Pounds for all of that! And prices inside the Pride festival were not too bad, although from a Welsh perspective a £5 pint is expensive.

The well planned event surged with huge crowds all weekend, well-behaved and serious mix of all ages, backgrounds, ethnicity and types of people.

The Pride Cymru crew had given some good thought to the layout of the area, with stages, toilets, food stalls, community area all given enough space and flows and sitting areas kept spotless and safe by a fun team of volunteers who worked hard all weekend to ensure everyone enjoyed themselves.

Main Sponsors of Pride Cymru ticketSource.co.uk – provided a superb and comfortable VIP area but the whole area was comfortably managed for ease of access for all, including a high dependency unit and best views of the main stage from the disabled area. There was a cabaret tent all day Saturday which transformed into the Glee Club comedy tent all day Sunday, a Ministry Of Sound Dance Arena which throbbed to the sounds of superb local DJ’s and brought the younger people of Cardiff out to dance and a focus on the local talent on the main stage on the Sunday.

Charlotte Church wowed crowds during the finale of Pride Cymru with her superb festival set of The Late Night Pop Dungeon combing superb eclectic music mixed with her enthusiastic, and inspiring activism. It’s so good to hear artists with some understanding of what it’s like being young and LGBT+ or just living in a community where life’s not so easy for you.

Headlining the three-day line-up, thousands of fans went wild as Charlotte Church took to the stage to perform following a UK tour with a line up the day before of some famous Welsh Tribute acts and some of the UK’s Premier Drag Performers, including our very own Lola Lasagne who wowed the crowds with their own engaging and entertaining set, giving the Welsh singers a run for their money as Lola’s beautiful voice echoed off the carved writhing Welsh dragons of City Hall. I’m pretty sure one or two of them winked back at Lola.

Acts performed outside the Civic Centre, with Fun Lovin’ Criminals having played on Friday, Into the Ark on Saturday and Charlotte Church on Sunday.

Stephen Doughty MP, of Cardiff South and Penarth joined the singers on stage to sing classic Queen song Crazy Little Thing Called Love with his own group House of Chords and there was plenty of other talent mixed in throughout the day.

As a Welsh Gay man, returning home for this superb, fun, engaging LGBT+ Pride event, I felt truly proud to see my countyfolk and capital city embracing LGBT+ folk and LGBT+ rights in such a passionate, friendly and authentic way.

What a great BIG weekend and what a welcome from the Cardiff and Welsh gay boyo’s.

For more information about the event and to view many more photos, click here: