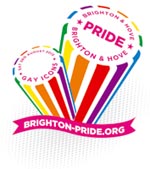 Pride 2013 was given an enthusiastic reception by an audience of Brighton’s shakers and movers at the Brighton Metropole Hotel, last Friday, March 22.

Hosted by the legendary Lola Lasagne, the audience were introduced to the new Pride Team of Directors by David Hill of E3 Entertainment Group whose upbeat presentation was well received by a receptive audience of business owners, sponsors and supporters of Pride.

David Hill, Chairman of Brighton Pride talked everyone present through the new developments, improvements and additions to Brighton Pride 2013 in an entertaining and inspirational presentation that left the audience both impressed and excited about plans already underway.

Of particular interest to many was the announcement of Pride’s brand new ticketing system and website as well as the new organisations ambitious plans for the future of Brighton’s Blue Ribbons event.

David reassured everyone about Prides LGBT community focused ethos, transparency and the addition of a brand new Pride Arts & Film Festival that already has the city’s LGBT arts scene buzzing with excitement.

He also highlighted the eagerly awaited Pride Gala Shows that see Brighton Pride take part in the world famous Brighton Fringe Festival for the very first time, bringing an LGBT focus to all Brighton Arts Festivals after being ignored over the years by successive festival organisers.

Guest speaker Gary Pargeter from the HIV charity Lunch Positive helped put Prides commitment and importance to the community in perspective while top live cabaret was provided courtesy of The Sundaes live on stage.

This years advance sales of ‘early bird’ tickets for Prides ‘Icons on the Park’ event on Preston Park on August 3 have been bigger than ever before.

Ticket sales are now digital and will be available to the public using online booking via brighton-pride.org where you will be able to print your own eticket that can be speedily scanned upon arrival at Preston Park, reduce queue times and speed up your admission to the fun on the park.

There are still a small number of early bird tickets available from www.brighton-pride.org until April 7, 2013 (subject to availability)

£1 per head for each ticket sold for the Preston Park event is ring fenced for the Rainbow Fund to distribute through their grants program administered by the Sussex Community Foundation to LGBT organisations, along with any profits after operational costs have been taken from the main event.

The Rainbow Fund is administered by the Sussex Community Foundation, and gives grants to LGBT and HIV organisations who deliver front line services to the LGBT community in Brighton and Hove.