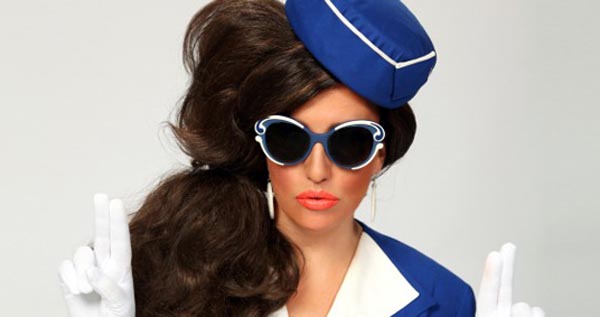 Make sure your seat backs are in their full upright position and your seat belt is correctly fastened.

The air stewardess the whole world likes to fly with, will touch down at the Hilton Brighton Metropole Hotel on Friday, August 5 for a night of first class in-flight entertainment.

Pam Ann, the award-winning alter ego of Australian comedian-writer-producer Caroline Reid, is scheduled to land in Brighton in time to deliver a night of caustic wit, unpredictable satire and the most stylish put-downs you’ll hear airside. She may wear white gloves but there’s nothing clean about this fly queen’s routine.

Pam Ann has spent the past 20 years impressing critics, audiences and airlines across the globe with her infamous live shows, TV appearances and YouTube videos. She has become trolley dolly cult viewing as her advertising campaigns, training videos and in-flight programming for British Airways, Quantas’ Come Fly With Me and London’s Heathrow SkyTeam Terminal circumnavigate the globe.

She’s impressed Madonna, crewed Elton John’s private jet, shared a stadium stage on a tour with Cher, hosted The Pam Ann Show on Australia’s Foxtel TV, headlined at the legendary Caroline’s on Broadway in New York, and wowed London with sell out performances at the London Palladium, The Royal Albert Hall and the Hammersmith Apollo.

Declared a “delicious comic creation!” by The Independent and so funny it was “like being held hostage on a plane filled with laughing gas” by The Telegraph, Pam Ann is set to bring turbulence of the blisteringly hilarious kind to Brighton Pride 2016 as she sets down to deliver comedy gold, regardless of the baggage allowance.

Get ready to Buckle Up Bitches and travel in style with Australia’s fly-high comedy phenomenon at this exclusive Pride Warm Up exclusive performance.

TICKETS WILL SELL OUT so advance tickets are essential.

This is a seated show. First class and business lounges, with optional super-limited meet-and-greet.  CAUTION: Adult content! Strictly over 18s only.

To book tickets for the Pride Festival, click here:

First Class gets you up close and personal in the front rows as Pam whooshes from the galley to the curtain.
Business Class is unreserved seating, but no flat beds here.
Meet & Greet is a chance to get intimate with Pam, but please, no touching.