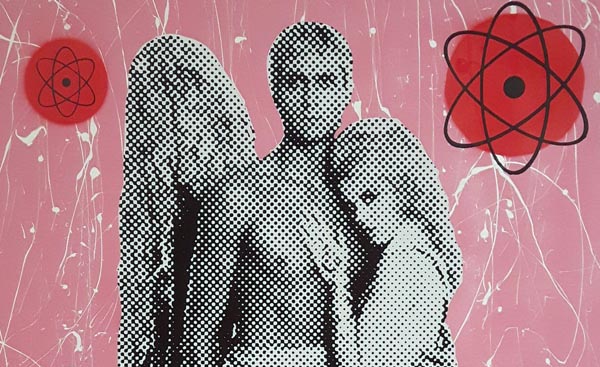 BILLY CHAINSAW’s first solo art show in Brighton – at the BRUSH gallery – sees him take his mixed-media ‘cut up pop art’ to another dimension, in which the dystopian reality of human existence attempts release via flashbacks to the psychedelic ’60s.

ARTIST STATEMENT: “In my early teens I developed an obsession with masks, the movies, magick and author William S. Burroughs. They’re elements that usually feature heavily in my mixed-media ‘cut up pop art’, which also references such diverse sources as cartoon surrealism, tattoos, and Lucha Libre (Mexican masked wrestling). However, for my BRUSH show I am channeling my first great love, American comic books.”

ABOUT BILLY CHAINSAW: He was born and raised in Birmingham. Inspired by the onset of punk, in the late 1970s he escaped factory life and moved to London to work for Siouxsie and The Banshees. On parting company with the group in the mid-90s, Chainsaw became editor-in-chief on one of Paul Raymond’s adult publications (the American version of Club International).

Fast-forward almost two decades to May 2012: now a Hove resident, Chainsaw showed his art publicly for the first time at an underground open house. His entire collection of mixed-media canvases and upcycled, bespoke ceramics completely sold out. It was a life-changing experience for Chainsaw, who immediately decided that art was his true calling.

Subsequently, he has exhibited in numerous group shows in such far-flung locations as Brighton and Los Angeles, and staged three solo show in London. His other achievements include creating a range of merchandise for legendary experimental filmmaker/artist Jeff Keen’s retrospective at the Brighton Museum & Art Gallery; an exclusive fabric design for cutting edge design company Charles of London; art for indie superstars The Fall’s 13 Killers album; and contributions to the book Cut Up! An Anthology Inspired By The Cut Up Method Of William S. Burroughs and Brion Gysin.

Although Chainsaw admits his first great love was American comic-books, since his early teens, the self-taught artist has been fascinated by the unknown (in its myriad forms), along with masks, the movies, and the magical weirdness of the number 23. They’re ever-present elements in his mixed-media pop art, which also reference such diverse sources as cartoon surrealism, tattoos, and Lucha Libre (masked Mexican wrestling). However, Chainsaw’s primary driving force is William S. Burroughs – perpetually employing the beat author/artist’s “open your mind and let the pictures out” adage whenever he’s creating art.