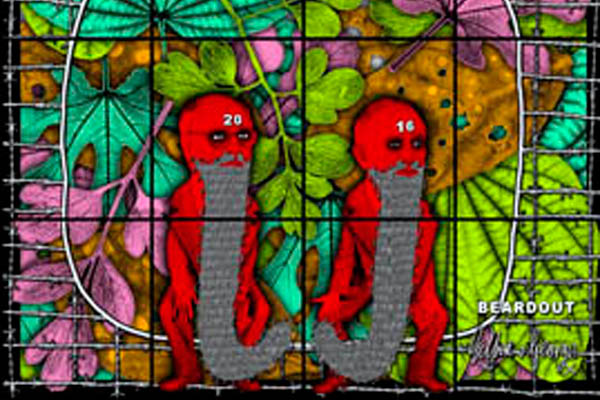 White Cube celebrates 50 years of the art of Gilbert & George with a new exhibition across all four galleries at Bermondsey.

THE BEARD PICTURES go on show alongside THE FUCKOSOPHY, a collection of nearly 4000 pronouncements and mottoes created by the artists.

Gilbert & George appear in THE BEARD PICTURES as looming, otherworldly figures masked by surreal and symbolic beards; referencing beards not only as an emblem of millennial youth, but also as a mark of religious faith and social status.

Also on display is THE FUCKOSOPHY, a collection of nearly 4000 pronouncements and mottoes created by Gilbert & George and installed on a large-scale in the main corridor and 9x9x9 gallery.

Gilbert & George first met as students at Saint Martin’s School of Art in 1967 and have lived and worked together in east London as a single artist ever since. They have been the recipients of many honours and awards, represented Great Britain at the 2005 Venice Biennale, and won the Turner Prize in 1986. Central to Gilbert & George’s approach to art-making is the motto Art for All.

Event: Gilbert & George: THE BEAR PICTURES and their FUCKOSOPHY