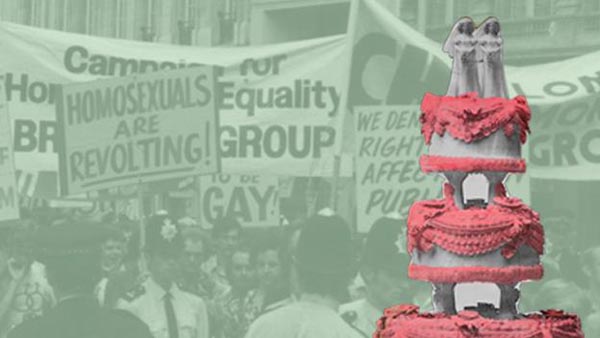 A new, free exhibition at the British Library, marks the 50th anniversary of the Sexual Offences Act 1967.

Gay UK: Love, Law and Liberty, explores gay lives through personal testimony, cultural expression and legal reform, from the 1895 trial of Oscar Wilde to the posthumous pardoning of historical homosexual offences this year.

The exhibition is hosted in the British Library’s Entrance Hall Gallery and marks the 50th anniversary of the Sexual Offences Act 1967, which partially decriminalised male homosexuality in England and Wales.

Spanning a century of social and legislative change in Britain, the exhibition considers how gay men and women have been represented as well as how they have sought to describe and define themselves, from the repressive decades of the first half of the twentieth century to the on-going campaign for full equality which continues today.

From original manuscripts and rare printed items to striking campaign material and unique oral history recordings, this is the first time these items have been on display together, showcasing the wealth and range of material in the Library’s heritage and contemporary collections.

♦ Original campaign material, journals and posters from groups such as the Gay Liberation Front, Lesbians and Gays Support the Miners and Outrage!
♦ Sarah Waters’ notebook with character notes that she used while writing Tipping the Velvet, going on public display for the first time
♦ Hanif Kureishi’s annotated script for My Beautiful Laundrette (1985) plus continuity polaroids from the set
♦ The first edition of Virginia Woolf’s Orlando, alongside a sound recording of Vita Sackville-West from 1954 talking about the inspiration for the book
♦ Kenneth Williams’ diary entry from 9 August 1967, which covers the murder of his friend, playwright and author Joe Orton
♦ An annotated script for A Taste of Honey by Shelagh Delaney (1958)
♦ A commissioned film by performer and artist Dickie Beau exploring the decriminalisation of homosexuality

Rachel Foss, Lead Curator of the exhibition, says: “Since the passing of the Sexual Offences Act fifty years ago, there has been a transformation in society’s attitudes towards gay love and expression.  Gay UK: Love, Law and Liberty tells this story through objects and documents that are iconic, public, personal or seemingly ephemeral.  These objects and documents are the tangible evidence of a living history that is fragmented, punctuated by gaps and still evolving.  I hope that the exhibition will prompt visitors to consider not only how far we as a society have come but also, crucially, what still needs to be done to combat prejudice and realise true equality.”

The British Library will be hosting an accompanying season of events to provoke debate on past and present understandings of individual identity, reflecting on how far we have come as a society.