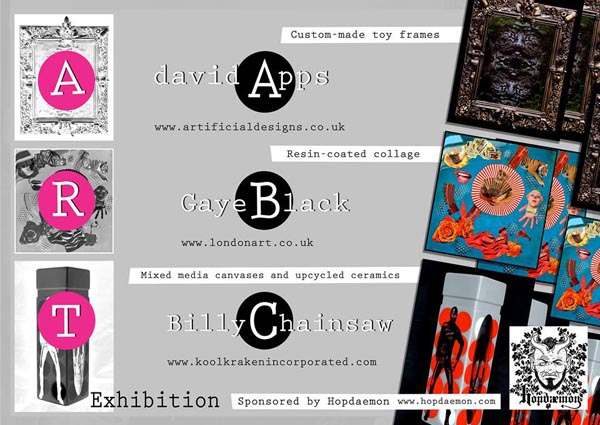 APPS, Black and Chainsaw share a joint vision – to provide a visual remedy to the mundanity of modern life.

Billy Chainsaw was born and raised in Birmingham. Inspired by the onset of punk, in the late 1970s he escaped factory life and moved to London to work for Siouxsie and The Banshees.

On parting company with the group in the mid-90s, Billy became editor-in-chief on one of Paul Raymond’s adult publications (the American version of Club International).

Almost two decades later in May 2012: Billy, now a Hove resident, showed his art in public for the first time at an underground open house. His entire collection of mixed-media canvases and upcycled, bespoke ceramics completely sold out. Billy says It was a “life-changing experience”, and he immediately decided that art was his true calling.

Subsequently, he has exhibited in numerous group shows in such far-flung locations as Brighton and Los Angeles, and staged a month-long solo show at London’s prestigious Horse Hospital gallery.

His other achievements include creating an exclusive fabric design for cutting edge design company, Charles of London; a range of merchandise for legendary experimental filmmaker/artist Jeff Keen’s retrospective at the Brighton Museum & Art Gallery; art for indie superstars The Fall’s 13 Killers album; and contributions to the book, Cut Up! An Anthology Inspired By The Cut Up Method Of William S. Burroughs And Brion Gysin.

He has had his art included in the last two Brighton Pride Art Shows at the Jubilee Library, as well as being features as a participant in 100 Artists For World AIDS Day at Brighton Dome.

Although Billy admits his first great love was American comic-books, since his early teens, the self-taught artist has been fascinated by the unknown (in its myriad forms), along with masks, the movies, and the magical weirdness of the number 23.

Gaye Black spent three years at art college in South Devon, qualifying as a graphic designer before becoming bass player with the Adverts. She is now exhibiting regularly and curating the odd show. Her work references her past, and explores the contrast between attraction and horror, mainly through collage.

David Apps was born in England in 1964, and grew up on the streets of the Thames Estuary, in Essex. By the time he had reached his teens, the British punk explosion and the Sex Pistols DIY artwork of Jamie Reid had captured his imagination and became a massive influence in his life.

Subsequently, he took up photography and moved to Upton Park, the unfashionable part of London’s East End. Through taking thousands of photographs he developed an eye for capturing anything and anyone intriguing that crossed his path.

To coincide with the 2012 Olympics, David was commissioned to create his first mural Butterflies, which still dominates the Stratford, East London skyline to this day.

His  limited edition screen-prints are generated by re-working, re-colouring, and layering his original photographs, to transform them into striking and original examples
of contemporary art.

To further his artistic vision, he has recently been using antiqued mirror over his photographic images – which he places inside frames constructed from such diverse materials as plastic toys, Lego, and jigsaw puzzle pieces.

In a life dominated with subversion David’s work is a clash of the dark, angelic, evocative, and kitsch. It’s very British and very ‘now’.

He has staged twelve exhibitions in two years, including four solo shows, in such diverse cities as Newcastle, Cambridge and Berlin.

Inspired by the South East coast, David moved to Hove in April 2014, and marked his arrival with a successful solo show on Brighton station.

David is a charismatic and his art demands your attention. His book East End, East London Photography is available worldwide on Amazon.

For more information on the ABC Art Exhibition, click here: