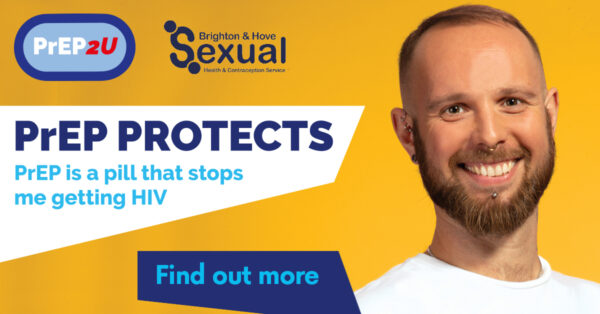 This year Terrence Higgins Trust turns 40. It’s a big birthday and a testament to how long our community has been fighting for the care we need to end HIV. It’s taken the combined powers of people living with HIV and those who are not to fight for the innovations and progress made over the decades.

Brighton & Hove has been at the forefront of this mission and has a proud track record of working together to design services that fit the needs of both HIV positive people and of those at risk of acquiring HIV.

One of the more recent examples of this community co-production is our innovative community PrEP clinic, PrEP2U, which is a partnership between Terrence Higgins Trust and SHAC.

PrEP is a drug taken by HIV negative people before and after sex that protects against HIV. It’s been a game changer in reducing the number of new cases of HIV. It’s now routinely available through sexual health clinics – but the fight for PrEP was long and hard. We wouldn’t have it available on the NHS if it wasn’t for the tireless work of activists pushing for it, many of whom are people living with HIV.

However getting PrEP to the people who most need it is a work in progress. Many people don’t know what it is or how to access it. There is also a cohort of people who do not want to go to mainstream sexual health clinics. There are many reasons why someone might not want to go to a clinic, such as previous bad experiences, stigma, or experiences of discrimination. Concerns about homophobia, transphobia and racism are still very much alive.

PrEP2U aims to remove some of these barriers by taking the sexual health clinic out of the equation. Every Thursday evening we open our doors to people who want to start on PrEP. During an appointment we offer a full HIV and STI screening, advice, information, vaccinations for HPV and Hep A/B, and of course PrEP to take home.

We began in spring 2022 and by September we’ve seen 52 individuals to date. Just over half had never accessed sexual health services before. Everyone was suitable for PrEP but 67% had never used it before. About half had reported condomless sex in the past three to 12 months with between one to five casual male partners. For those who had used it before, some had been sourcing their PrEP through private prescription; which was common before it was available on the NHS. And of those who had previously been using PrEP but had stopped, PrEP2U has been an easy way to get restarted.

The majority of people coming to PrEP2U have been gay or bisexual men and four fifths were over 30 years old. It’s been encouraging that we’ve also seen some trans people and women, who are often underrepresented in PrEP clinics. PrEP can be used by people of all genders and sexualities, so it’s vital that everyone knows about it.

The next step for PrEP2U is ensuring that under-represented groups know about PrEP and how they can get it. This means ensuring young people are aware of testing and prevention options. As we did 40 years ago, we see young people come of age in the city, so it’s vital we share with them the tools needed to end HIV transmission by 2030.