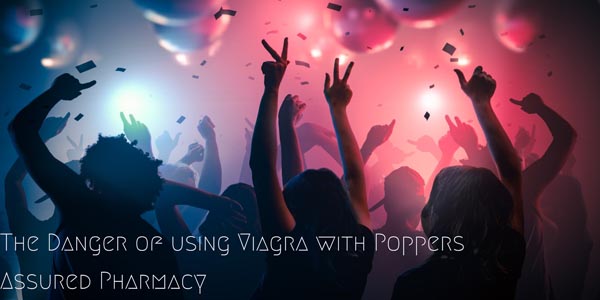 Following recent medical reports, urgent research is underway to further explore a potentially dangerous consequence of poppers and Viagra when used together.

INITIAL concerns suggest that in some users, the combination may be fatal.

The use of Viagra and poppers is not uncommon amongst the gay communities, often along with alcohol and recreational drugs. The most common side effect reported amongst combination users is a strong headache, but often dizziness, sickness, and even a temporary loss of consciousness known as syncope.

However, it is a serious and sudden drop in blood pressure that is causing the most concern as this can prove to be fatal.

The reason people use both of these things together is so they can sustain a sexual encounter for longer while also using the effects of poppers to facilitate this play. While it may be fun there are risks and these risks are certainly something to be aware of and take seriously.

– Poppers are normally sold in small bottles. The volatile liquid inside evaporates to produce a vapour that can be inhaled.

– Poppers can be called a range of things including Amyl Nitrate, Butyl Nitrite, and Liquid Gold. They can be found on sale in a range of shops but normally sex shops and so-called “head shops” often associated with smoking paraphernalia

– Historically poppers were used to treat angina in the mid to late 1800s. They were used as a room odourisor and were never intended to be inhaled directly.

– The active chemical in Viagra is called Sildenafil. Viagra is simply the brand name.

– The original development involved trying to find a treatment for cardiovascular diseases and not erectile dysfunction.

– Viagra has been taken by over 40 million men globally and this number continues to rise!

– Viagra is commonly copied, the market is flooded with fake Viagra many of which either don’t work or can have harmful ingredients

This is the second serious health risk now linked to the use of poppers, following the identification of poppers maculopathy which affects the eyes.

In 2006 one of the key ingredients of poppers, isobutyl nitrite was reclassified as a cancer-causing drug and replaced with isopropyl nitrite. It is this substituted ingredient that is thought to be linked to poppers maculopathy although it is not yet known what is the cause of these newly recorded symptoms.

Poppers use alone reduces blood pressure and increases the heart-rate, and recorded common side effects of Viagra include headaches and blurred or impaired vision. Over 1% of the UK’s population state that they have used poppers in the past twelve months, making it the UK’s fourth most popular recreational drug.

Both Viagra and Poppers can cause blood pressure to drop and it is this combination that can prove fatal.

Generally, it is recommended to avoid any recreational drugs.

– It is highly advisable not to take Viagra and Poppers with 24 hours of each other. outside of this window, the risk for a fatal blood pressure drop is greatly reduced.

– Poppers just so happen to be very flammable so keep them away from any naked flames.

As part of their research, Pharmacists, Assured Pharmacy has created a survey (this survey is now complete  – edit April 2021)

Survey results can be seen here

Results from the survey will be used to determine how little is known about the issue and if there is a particular demographic that requires a more urgent focus.