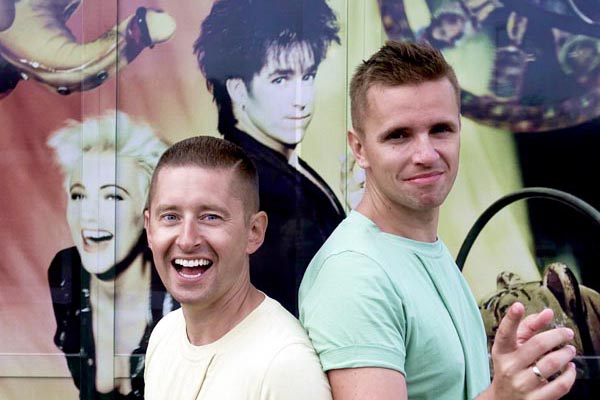 Gay couple Jakub Kwiecinski and Dawid Mycek married in Madeira on June 9 because they could not marry in Poland.

They filmed their honeymoon trip through Scandinavia and have made a music video backed by a new Roxette song, Good Karma.

Jakub and Dawid shot to international attention a year ago when they made a coming out video lip synching to the Roxette song Some Other Summer.

The video found it’s way to the legendary Swedish group, who loved it and shared it on their official site.

The video went viral but in their own country, Poland, the couple suffered from hate reprisals and homophobic attacks.

The boys decided they wanted to get married. Same sex marriage and civil unions are not legally recognised in Poland so they arranged a wedding ceremony in Madeira, Portugal.

They set off on honeymoon to Scandinavia straight after the wedding where they made their new video.

Dawid said: “It was totally different than when we recorded our first video. This time we obtained official permission from Roxette to make the video which made us very nervous in the knowledge that such a  legendary band were going to watch it”.

During their honeymoon the couple visited four countries travelling 8.000 kilometres across Scandinavia, filming all the way. They even climbed the famous rocks Trolltunga and Pleikestolen to film some remarkable footage.

Everything went well for the pair and Roxette love the video, sharing it once again on their official fan site.

Jacob said: “It’s a bit like ‘deja vu’, but it’s really great to be fans of such a great band who support LGBT+ rights. Even during our wedding ceremony we listened to “Listen to your heart”. I think it’s the perfect way to end our music video story, we have now come full circle on our journey and its time to grow up.”