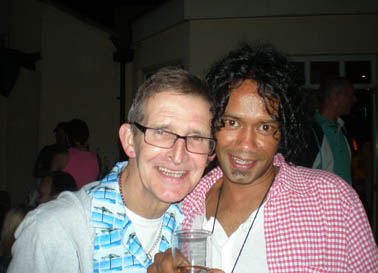 Detectives investigating the death of Michael Polding in Brighton earlier this year have today launched a website.

The website  has been created to assist in gathering information from the public regarding the whereabouts of Ricky, aka Ricardo Pisano, Brandon Victor Pillay and Ree, who is wanted in connection with Michael’s murder. It is the first website of its kind that has been created by Sussex Police.

Detective Chief Inspector Nick May of Surrey and Sussex Major Crime Team is leading the investigation, known as Operation Journal.

“It has been nearly five months since Michael’s body was found in his flat in St George’s Road but our investigation into his death continues. We are determined to get justice for Michael and his family and this case will remain open until we do so.

“During our enquiries we have become interested in tracing Ricky in connection with Michael’s death, however we have been unable to trace him to date.

“This new website is a part of our efforts to trace him. I would urge everyone to take a look at the website – particularly at the pictures of Ricky – and contact Sussex Police with any information about his whereabouts. We would also like to hear from anyone who has had contact with him in the past. Any information, no matter how small you think it may be, could be the vital piece in the jigsaw to trace Ricky’s whereabouts.

“Ricky has links across the world – including to New Zealand and South Africa – and also within the UK. The last positive sighting of him was in the Marlans shopping centre in Southampton at the end of July. He could now have travelled anywhere in the UK or the world.

“He changes his appearance and his identity so it is important that people take a good look at the photographs and don’t assume he will be introducing himself as one of the names currently known to police.”

Michael Polding was an openly gay man who moved from Scotland to Croydon with his partner in the 70s. Michael’s partner died in 2001 and last year he moved to Brighton.

Ricky has known links to South Africa, New Zealand, Brighton, Croydon, Crouch End in London and Southampton, although detectives believe he may have now travelled elsewhere.

MICHAEL POLDING for other ways of making contacting.