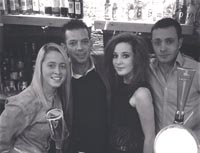 Can you imagine it? A whole county and only one gay pub? And now they’re taking that away from us.

James Iannone took over The Grinning Rat in Ipswich just four months ago, providing a lifeline for a marginalised and faceless community. He has invested thousands on creating a vibrant environment and has brought previously isolated people together for a range of events and themed nights. Without The Grinning Rat there is quite literally nowhere else in the county for gay people to go, relax, meet people and more importantly, feel safe in a town not known for embracing diversity.

And now this is all under threat. In fact, James has been given just one weeks’ notice to vacate the premises.

“All my hard work has been taken away and I don’t know why. I never did anything wrong, I did everything by the book and we never had any trouble with the police.”

With no explanation offered we are left to wonder exactly why he has been treated so badly. The pub is thriving, a community is blossoming; the brewery can only lose now by ejecting him, so what is the reason behind this? Did they simply use James for the thousands he invested, dangling a carrot in front of him with a five-year contract pinned to it, only to take it away again?

Was it always their intention to encourage him to build his community on quicksand only to watch it sink?

Should we all be rallying at the bar with our rainbow flags ready to take on the homophobes?

I guess we’ll never know, especially since Punch Taverns’ response in a local news report on the subject acknowledges none of the issues (“We have every confidence that he (the new licensee) will be able to take the pub from strength to strength…”)

What we do know is that we’re not going down without a fight and we need your help to save our pub. Punch Taverns can still be persuaded to change their minds if we all email them and tell them that we won’t stand for it. It doesn’t matter if you’ve never even been to Ipswich; you know how important it is to feel part of a community and we need your support.

Please email john.price@punchtaverns.com and give him hell!

A petition has been set up to support the pub.

The Suffolk LGBT community is relying on you!

A spokesperson for Punch Tavern, said:

“We have worked in close partnership with Mr Iannone and as his short-term agreement was on a temporary basis, it gives the right for either party to give immediate notice. After reviewing a business plan from another interested party, the commercial decision was made to recruit Mr Hughes on a similar short-term lease agreement.

“We are in regular dialogue and continue to work closely with Mr Iannone. In our recruitment process, we select licensees we believe to be the best operators and base our decision only on proposed business strategies. We feel that the newly recruited licensee, Mr Hughes, will be able to take the Grinning Rat from strength to strength and continue to serve the local community, regardless of sexual orientation. We look for a smooth transition without the need to close the pub.

“Any allegations of homophobia are completely unfounded and potentially libellous.”

“Well, I still haven’t had anything from them in writing to say about leaving. They told me the new operator would not be carrying on the gay venue and the acting area manager is still refusing to come out and see me despite the fact he was meant to be in Ipswich today to do the handover’.”