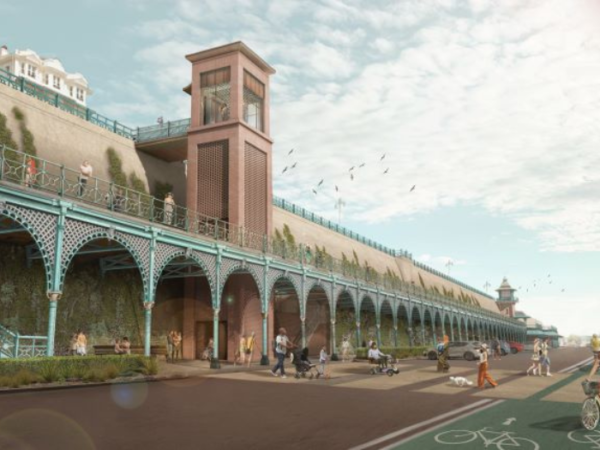 Brighton & Hove City Council (BHCC) has announced its design team has finalised plans for the first phase of restoration for Madeira Terrace. According to BHCC, a planning application will now be submitted and once validated, approval to start the project will be sought at planning committee on November 2. Work on site is expected to start in summer 2023.

In the meantime, following a structural survey, contractors will begin work to clear weeds and debris from behind the fencing and on the decking and walkway along the terrace.

A design team of engineers and construction experts were appointed in summer 2020. The team has worked with an Advisory Panel of local representatives from different sectors, including tourism, community and events, to agree the focus of the first phase of the restoration.

The first phase will see the transformation of 41 arches – about a quarter of the whole terrace – between the Royal Crescent steps and Concorde 2 venue.

A key part of the restoration is to bring back the function of the terrace as a ‘linear stadium’ for viewing events on Madeira Drive and improving pedestrian access from Marine Parade to the seafront.

It also aims to introduce the concept of Madeira Terrace as part of a linear ‘park’ for the eastern seafront area, tying in with the Black Rock rejuvenation work which has prioritised planting and physical access to the eastern beachfront.

Restoration work will address a number of key issues:
• Repairing and protecting the cast iron
• Improving the design of key components to ensure greater longevity and protection from the elements
• Redesigning the mid-deck walkway
• Restoring decorative elements such as the striking spandrels at the front of the arches
• Meeting current building regulations to make things safer, for example, the balustrades will be raised up to just over one metre as they have been along other sections of the seafront

• Safeguarding and retaining the old green spindle plants to re-establish the Green Wall at the back of the terrace.

Improvement works will include installing new seating and lighting and space for pop ups on the deck and at ground level to accommodate events such as food festivals or music events.

The Grade 2 listed Madeira Shelter Hall Lift, (within Concorde 2) will be restored and brought into line with modern standards. A brand-new lift will also be installed at the Royal Crescent Steps allowing access down to Madeira Drive during the day and at night and improving disabled access to the seafront.

Along with the restoration of the present Grade 2 listed east facing staircase, a brand-new staircase will also be created to the west of the Madeira Shelter Hall Lift.

Circular economy principles will be used throughout the project to reduce waste and reuse as much existing material as possible. The cast iron contains a considerable amount of embodied carbon and so retaining as much of this as possible is the most positive way of supporting the planet’s climate emergency.

The design team is hoping that once dismantled a significant amount of cast iron can be repaired to minimise the amount of new cast iron pieces required. New structural beams will be recast and replaced, only if they are not able to be repaired.

Councillor Tom Druitt, chair of the Eastern Seafront Project Board, said: “The Madeira Terrace restoration project is the biggest project the council has embarked on for a long time. It is an enormous task but we are making progress and it’s fantastic to now have the first phase underway.

“The renovation of 41 arches in phase one will bring a new lease of life to the eastern seafront, attract more visitors and benefit the whole city, particularly residents east of the pier.

“We know how important Madeira Terrace is to both residents and visitors alike, it has such a rich history and we’re determined to bring it back to life and see it sitting proudly on our seafront once again”.

Bill Puddicombe, chair of the Advisory Panel, added: “Madeira Terrace is such an important part of our seafront and city heritage. So many of us have been waiting so long to see progress made.

“Work on site is what we want to see and with the planning process now in progress, we’re moving another step closer to that ‘boots on site’ moment we’re all longing for.”