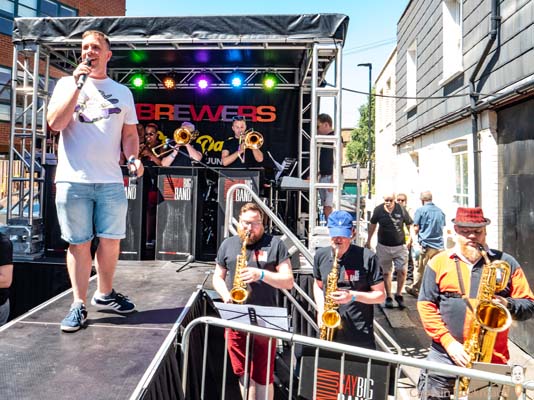 FOR well over thirty-five years The Two Brewers has employed a simple formula of cabaret in one room and dancing in the other, giving credence to the phrase ‘if it ain’t broke, then don’t fix it’, but once a year the Two Brewers literally throws open its doors and the party goes outside onto the streets of Clapham.
Once, a joint effort between the Brewers and the late lamented Kazbar the street party has grown in size to provide the assorted LGBT+ communities of Clapham and beyond a great day out.
Starting with the smooth sounds of the London Gay Big Band, (plus a surprise guest singer!), the cabaret started in earnest when Sandra took to the stage at 2pm. With her trademark choice of wit and song she quickly set the tone for the afternoon and introducing the cream of the UK’s cabaret circuit.
Firm Two Brewers favourites, Mrs Moore and Rose Garden kicked things off before making way for Baby Ru – a stand out contestant from this years Drag Idol and at night a member of the cast of Aladdin. Last years Drag Idol winner Tracy Barlow showed why she was a worthy winner and KY Kelly lived up to her recent mantle of Best Newcomer in the Boyz awards.
Finally Lola Lasagne took to the stage to host the remainder of the day. Each act kept the atmosphere building showing that the Two Brewers really do know their stuff when booking cabaret.
Heart & Soul and CK led a mass sing-along with a mix of 70’s & 80’s classics. Then Brighton was well and truly represented by the force of natures that are Miss Jason and Maisie Trollette. Despite the lateness of the hour, Maisie received the utmost respect from the assembled audience which was fully deserved given her history with the venue and entertaining of the national cabaret scene in general.
Mary Mac, Kelly Wilde and Danny Beard bought things to a close with high-octane performances before Clapham’s finest disappeared into the night.
The Two Brewers street party had gravitas lent to it by a speech from Lambeth’s newly elected Mayor, Councillor Christopher Wellbelove who presented Brewers manager, Jimmy Smith with a certificate of thanks for his work and support for Lambeth’s LGBT+ scene over the years.
It was a grand day out as Wallace and Grommit might say and everyone is looking forward to next years party!
Photos by Captain Cockroach.