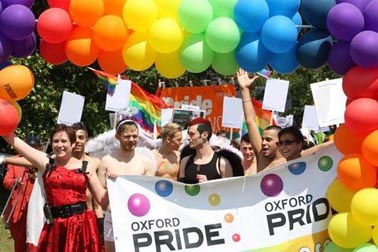 Oxford Pride have announced that the theme of next year’s Oxford Pride will be Not There Yet  a celebration of what has been achieved, but also as a reminder of the continued suffering and persecution of many LGBT people around the world.
Statistics provided by Amnesty International reveal that consensual same-sex relations are still illegal in 76 countries including Uganda where homosexuality is punishable by death. Furthermore, the Home Office reported that there were 4,252 sexual orientation hate crimes and a further 315 transgender hate crimes recorded by the police in England and Wales in 2011/12.
Oxford Pride 2013 will also seek to answer the lingering questions of why Pride events are still necessary or relevant to society, and whether they should still exist in countries with progressive LGBT legislation such as same-sex marriage and civil unions.
The ten day family friendly festival starts from Friday, May 31 2013 and will feature live entertainment, amusements, a children’s area, a variety of stalls and food options, plus arts and cultural events culminating in a grand celebration on Saturday June 8.
If you would like to get involved by way of volunteering, donations, sponsorship, raffles, purchasing a stall or concession or participating in art exhibitions and events, view: