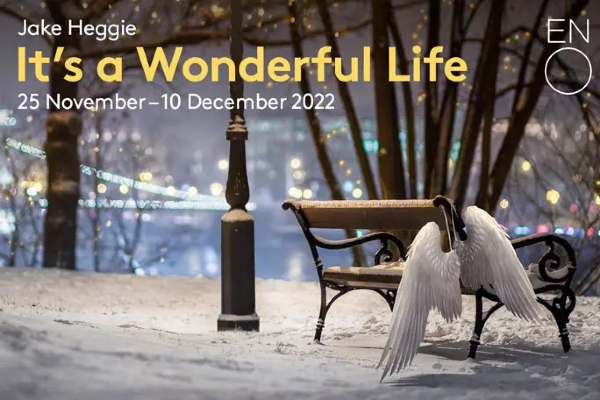 Jake Heggie and Gene Scheer‘s operatic adaptation of the genre-defining Frank Capra film of the same name, the It’s a Wonderful Life opera is based on The classic Christmas story of Bedford Falls redefined for a new generation. It’s a white Christmas – though not everything is merry and bright.

Down-on-his-luck banker George Bailey (Frederick Ballentine) feels like life has passed him by, so when his guardian angel (Danielle de Niese) pays him a visit, George is shown what life in his beloved Bedford Falls would be like without him in it: maybe it’d be a little less wonderful after all?

Kieron Rennie, the ENO”s resident poet opened the night with work drawn from his reading of the film and harking the power of the tangled strings that connect us from  acts of daily shared kindnesses, and which build a community which cares.

Jake Heggies’ careful reduction of the peculiar festive classic is, like a lot of the work they’ve produced in the last 20 years, filled with moments of glory and emotional heft, giving us a recognisable ‘Wonderful Life’ but from a subtly different reference point, offering a deeper insight into the reasons that take George Bailey to the literal edge of despair. The music is a tasty cheesy smorgasbord of references of great American composers from the early 1920’s through lush Hollywood diehards with some subtle sprinkling of Christmas tunes but there’s no stand out musical moment and as the narrative progresses into it’s darker emotional woods, the music continues to skip along, sweetness and light still as all hope fades.

Gene Scheer’s libretto gives the audience the lines they know from the film, altering the angle of how we see George’s  life and also the angel that saves his life, giving the brilliant voiced  Danielle de Niese   space to offer up a rather dopey, relentlessly earnest and suspiciously callous angel who seems far more interested in getting their wings that making George’s life any better. Celestial gaslighting in action. Her full bodied voice fills the auditorium of the Coliseum, clarity and diction shimmering under her rather dumpy costume. When she eventually gets her wings I must admit I giggled as she lifted off, but perhaps this was the corny apple pie sweetness of the evening finally eroding my long held suspicion of the wholesomeness of the film and it’s plot.

George is sung sensually by Frederick Ballantine, is almost on stage the whole time, he is a wonderful rich tenor, singing with warmth, clarity and diction beginning the fall into desperation to life and emoting his heart out when he wants to return to life. He is perfectly matched with Jennifer France who excellent as George’s’s love of the life Mary Hatch, the only person who really comes back for him and the only one who sacrifices anything in the ways that defines his own life. She sings and lifts the opera into a space of bliss, my attention was wandering a bit but France’s ability to capture and project the passion of love’s acknowledgement was beautiful. A real highlight of the night.

Ronald Samm thrills each time he sings and rumbles across the stage and plot with their slow witted but deeply kind Uncle Billy.  Michael Mayes gives us a panto villain of Trumpian nastiness in his resonant performance of Henry F Potter, his voice underscoring the depravity of the man superbly.  Donovan Singletary’s massive presence as  Harry, George’s brother, is all American hero made flesh. A thrilling performance from him this evening, his voice as huge and commanding as his massive muscles, I was quite distracted by him. Perfect casting.

Gabrielle Daltons’ set, a perspective driven corridor, projected with endless stars, sliding open and shut with each door opening into a different day of George’s life, is fine for a first suggestion, of moments captured and explored, but with no opportunity for background it all became very focused on those pull out drawers of emotive expectations. I’d have welcomed some more effective changes to the evening’s stage.

Aletta Collins’ production is sharply directed, allowing the themes of community exploitation, profit driven greed, desperate individuals crushed by chance,  driven to suicide balanced by the power of working together to build a stronger community and caustic hope.  Collins’ makes this production a hymn to the working class Americans decent simple lives.  There’s some slick movement on the stage with the chorus used in some imaginative choreography to give real movement and background to some of the busier scenes, but the set fixes things in this in-between place, where all moments converge, where the angels watch, where the explanations of the constant frustrations of George’s life are explored and laid bare. He’s almost cursed and unable to leave this apple pie town, whilst all others seem to achieve their dreams, travel the world and he plods on, slave to duty and circumstance.

We watch, under a roof of glittering stars and traffic lights which drop, project and flitter up and down as the night progresses.  At the pivotal scene where George is presented with a transformed Potterville where he never existed, the music stops and we don’t really get to see any suggestions of what a rather fun place this new Pottersville is, with it’s bars and exciting nightlight, but just a shuffling line of overcoats mumbling rejection. It’s an oddly suppressed offer from a production that tries so hard to engage the sweetness.

Nicole Paiement has the orchestra in control, and gave us a clear engaging emotional rendition of the score, which slipped on occasion losing complete connection with the action on stage, no doubt this will tighten up.

The chorus, oh how my heart weeps for them if the ENO is forced to move. Tonight, they shine like the many stars projected onto the set, each one blended to perfection to drive out angst and tedium with the organic refulgent beauty of their voices. They are simply splendid and we even get an opportunity to sing-a-long with them at the very end, a deliciously awkward British pastime at the best of times, but poignant and melodic with the full house of the vast Coliseum auditorium joining the massed perfection of the Chorus singing out at us.

The supporting cast are excellent, bringing new talent to the fore and, as usual with the ENO, offering real diversity on the stage which challenges and subverts the embedded racisms of the original film.  It‘s great to see such a group of happy kids on stage who add to the production.

See the full list of cast and creatives here

With the ENO in existential crisis itself following the malicious government led funding choices imposed on the Arts Council one can any hope they also get an Angel to save them at the last minute, like George, but perhaps with the offer of a brighter future in their beloved Coliseum, if only George could hope for as much.

Wonderful Life is a cosy, warm offering from the ENO, filled with astonishing bursts of beauty from a magnificent cast but let down by a narrative tension which drags the first half and only really offers redemption in the second half. The unrequited hopes, longing and dreams at the heart of this Opera are overwhelmed on occasion by it being dipped in honey, it’s ok now, have another desperately grateful hugginess of a broken person being made to bend knee to conservative American family values.  Heggie offers, like the film, a review but with no redemptive happy ever after, although it appears on the highly polished glimmering surface to be so.  The angels are happy anyway, they got what they wanted.

This opera is a fresh and warming family friendly offering of festive joy and just shows what the ENO does well: to reach out to people who enjoy performances of quality which do as much for equality and equity as they do for musical precision.

To book tickets or for more info, the ENO website site here

English National Opera are appealing for an urgent revision of last week’s funding announcement by the Arts Council of England. Show your support by signing their petition, here.