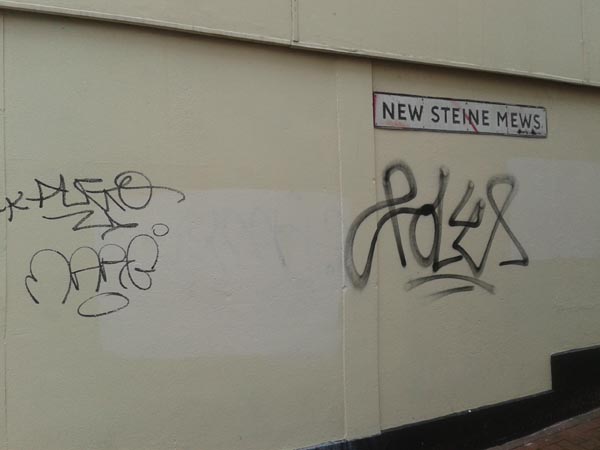 Following their success in providing new lighting for the St James Street area, the new St James’ Street LAT scored another success last week in getting graffiti cleaned off the walls  of a building.

The St.James’s Community Action Group (the new LAT) reported the above graffiti early in the morning to the specialist team within CityClean. It was removed by 1pm the same day.

The new resident led community group has a sub-group dedicated to ‘cleaning and greening’ the neighbourhood, and this is one example of the group in action.

The public are encouraged to report any further examples of graffiti to the Community Group by emailing:

As part of the ‘greening’ of the neighbourhood, the next project will be new plantings in the New Steine Mews.  This follows on from the very successful sprucing up of the New Steine Gardens, before Christmas when CityParks spent 3 days clearing away years of detritus from beneath the hedging and also gave the hedges a much needed trim.

“just one example of what can be achieved with community led action groups working alongside other agencies, improving the neighbourhood for everyone’s benefit”