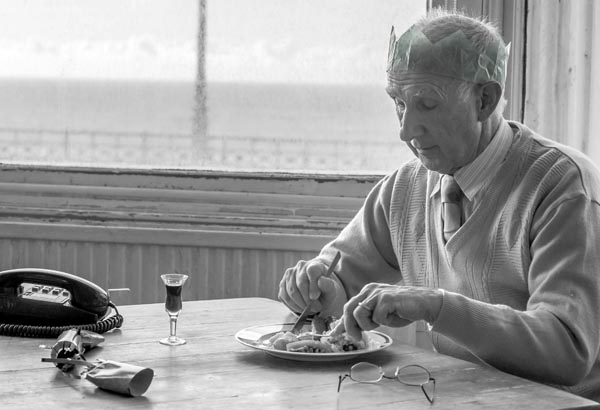 Impetus, the Brighton and Hove charity dedicated to providing befriending, advocacy and support services to vulnerable adults, launch a new 2016 Christmas campaign to help tackle the issue of loneliness and isolation in Brighton and Hove, for Christmas and at all times of the year.

The facts speak for themselves:

♦ 70% of the people Impetus help, tell them that isolation is the most difficult aspect of their life

♦ £10.35 allows Impetus to befriend an isolated and vulnerable person for a week

Help Impetus ensure no one is lonely in Brighton and Hove this Christmas.

Impetus know that as we head towards 2017 this is an unacceptable situation which affects everyone, and isolation is shockingly an ongoing issue in Brighton & Hove, which has a profound effect on people’s well-being and mental health (particularly at Christmas) which is why they need to mobilise local support for the campaign.

Being lonely doesn’t just affect the elderly as other charities will emphasise. Loneliness can hit anyone, at any age, for several reasons.

Jo Ivens is the CEO of Impetus, said: “Loneliness can have a devastating impact at any time of year. But as Christmas approaches and families plan their festivities, we will be working with some of the most isolated and vulnerable people in our city. We are urging people to use their phones to donate £5 to our appeal, it’s really easy to do and will make such a big difference.”

RD is 58 and has had multiple falls and suffers from chronic pain. Impetus are liaising with Adult Social Care. RD felt no one was interested in him until Impetus became involved.

KC is 96 and getting confused and frail.  Impetus sorted out some falls-prevention adaptations but after another fall, they went to hospital and then Impetus helped to organise a care home. The Impetus volunteer liaised with the daughter in Australia. KC is now in a care home and feels much safer.

WJ is 71, housebound, deaf, and has severe arthritis. Impetus, with a social-worker, have helped with selling their property and helped them to move. The Impetus volunteer liaised with a solicitor to get them the support they needed.

Dorothy came from a big family, with six big brothers. At 19 Dorothy joined the Royal Air Force and became a cook, all of her brothers joined the Army. Dorothy used to enjoy going dancing and because it was mixed with boys and girls, it is where she met her husband who was in the Navy. He didn’t dance, so they used to go out walking, as there was little else to do in those days. “We did do a few things we weren’t supposed to and pretended we got lost, but we had a lot of fun ..”

Dorothy, with her husband, had 2 daughters and a foster son, and they all belonged to brownies and cubs and she was a member too. They all used to go camping and everyone mixed with everyone. “It was fun and great company -” it was all we needed”.

But that was a long time ago…

Dorothy is now a widow and in her 90s and doesn’t see much of anybody anymore. She used to speak to her brothers every day but there’s only 1 left now.  “It’s not  a life I like” said Dorothy. “I’ve got plenty to do all day but it’s not much fun on your own. I liked it when I could get out into the garden and see the neighbours but now I don’t see anybody.”

“Nobody likes to be lonely or live on their own. My family is depleting and I sit here thinking what am I doing on my own. I don’t have a family to visit me.”

Dorothy’s voice brightens when she talks about the lady from Impetus who comes to see her every day for an hour. “We have a cup of tea, chat and have a laugh about old times, talk about the grand-children. We discuss things and understand each other. We have a good natter and a laugh. She’s lovely and I so enjoy her visiting me”.

♦ Donate – give £5 and help them ensure no one has to be lonely this Christmas – and throughout the year. It costs them just £10.35 to provide weekly befriending support for one isolated person. (Your money will be spent on directly helping those in need: in recruiting and training our volunteers and matching them with isolated people and in providing support to help individuals access information and services to improve their lives).

♦ Be a good neighbour – check on your neighbours this Christmas time. Why not drop round some mince pies, invite them in for a cuppa or just let them know you care.

♦ Volunteer – become a volunteer with Impetus and help people in your local community feel less isolated and happier.

♦ Fundraise – get your friends together, put on an event, do something silly for sponsorship; every penny really does count.

♦ Spread the word – help them make the campaign come alive by championing them on social media and in your own networks. The more people who know about them, the greater impact they will have – get liking and sharing!

Impetus’ committed volunteers are trained to befriend people, to visit them and listen to them, to offer advice and a friendly ear, to give them confidence and hope.