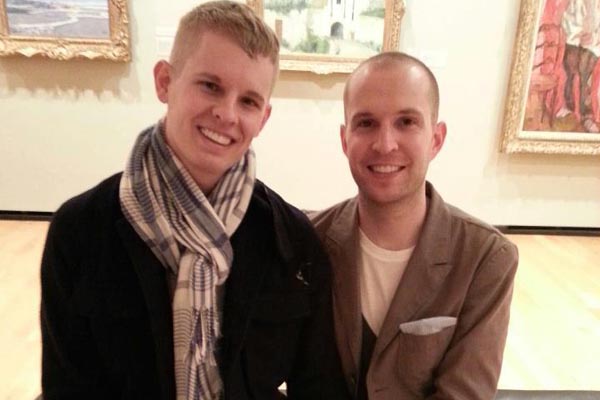 KONRAD is a writer for PQ Monthly, GeeksOUT, and Q Center, with op-eds in a number of different publications including The Washington Blade and Q Salt Lake.

He helped to bring attention to the New York-based GeeksOUT organization when he wrote an op-ed urging filmgoers to avoid Ender’s Game.

After seeing congratulations for the couple on Latrice Royale’s Facebook, we’ve learned that Konrad will be marrying Robert “Robbie” Peterson.

Latrice Royale is a drag queen and former RuPaul’s Drag Race contender on the fifth season. She was most recently in London for a performance at The Meth Lab on Camden High St.

Robert Peterson is from Albuquerque, New Mexico, where he was a competitive jazz tap dancer and worked in finance before moving to Portland, Oregon. He and Konrad were both members of the Pivotal Reads Book Club at Pivot in Portland, which Konrad ran.

The two became engaged at the Albuquerque International Balloon Fiesta. Peterson bending down on one knee to propose was captured on camera in late 2014 by Angela Ollison, Digital Manager of KRQE, a New Mexico news station.

The couple has set a wedding date of August 20, 2016, at Silver Creek Falls in Silverton, Oregon. The South Falls Lodge, where the reception is being held, is on the U.S. National Register of Historic Places.

Other online congratulations for the couple have come from Honey Mahogany, another RuPaul’s Drag Race alum, followed by activist Eric Rosswood, author of My Uncle’s Wedding.