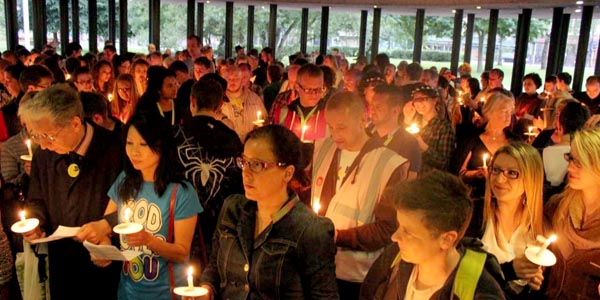 Newcastle Pride closes on Sunday, (July 22) with members and friends of all LGBT+ communities coming together to show solidarity with those going through hardship and those who have lost their lives in the fight for LGBT+ rights.

THIS Sunday (July 22), LGBT charity, Northern Pride, will be hosting a candlelit vigil to mark the end of Newcastle Pride.

Held on the festival site at Nuns Moor Park at 9pm, the vigil will include readings from members of Northern Lights MCC, an inclusive church founded by LGBT+ people in the North East.

Stephen Willis, Festival Director at Newcastle Pride, said: “Marking the end of the weekend festival with the candlelit vigil is important to remind ourselves of the true message behind Pride.

“Prides were formed as a protest for LGBT+ people to be afforded the same respect and rights as everyone else and sadly, there are many places around the world where this has yet to be achieved.

“We would love for as many people as possible to join us on Sunday at the vigil to make a stand against all forms of discrimination against LGBT people, to celebrate the lives of those we have lost and show our solidarity with those who are still having to fight.”

This year’s sponsors, Co-op Funeralcare, are delighted to be lending their support.

The theme of this year’s festival is celebrating 40 years of the rainbow flag, designed by LGBT+ artist and activist, Gilbert Baker – which has become a symbol synonymous with the LGBT+ communities.

Newcastle Pride kicks off with the Pride Parade which starts at Newcastle Civic Centre at noon on Saturday July 21 and makes its way through the city before ending at the festival site, Nuns Moor Park.

Across the two-day festival, visitors will be able to enjoy both chart-topping and local acts on the Manchester Airport San Francisco Stage and a range of zones, including a fun fair, the Steve Paske Health Zone, the Family Zone and a range of food and drink stalls.

The weekend festival is free to attend, but a limited number of Golden Circle and VIP tickets are available for those who want to secure the best views of the stage across the weekend’s performances.

For more information about Newcastle Pride or to purchase tickets, click here: