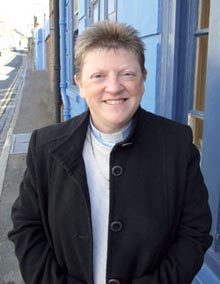 I had begun to notice a few bruises appearing under my skin that I could not explain. I did have occasional nose bleeds and my gums bled more frequently when I cleaned my teeth, but I probably could have put most of this down to reaching the menopause.

I wasn’t particularly tired or feeling ill, in fact I was as energetic as I had ever been, but something in the back of my mind said I should get it checked at the doctors.

It was about six weeks into my symptoms when I saw my GP who thought I was most likely anaemic so he sent me for a blood test. Only six hours after I had that test, I had an urgent call telling me to get into hospital immediately because I had Acute Myloid Leukemia and my platelets were so low that I could bleed out at any time. (The average person has around 200 and I had 11.)

My partner and I were in total shock. I had an hour to throw a few things into a bag and get into the Royal Sussex. I’d never been in hospital for longer than 24 hours and I’d always cared for others who had cancer and illnesses, never thinking for one moment that one day the tables might turn and that I might have to allow others to look after me!

The Haematology Department were incredible. From the moment we walked in, we were cared for, loved, supported and we knew they were totally committed to getting the treatment right for me. If you had told me then that I would be in hospital for the next six months with the odd week or so at home, I probably would have left there and then. The chemo treatment was very intense and I wanted to give up so often, but six months later I’m in remission and my body has responded well to the treatment.

This part of my life journey had not been expected!

In the mean time, my personal approach to spirituality and faith has taken a new turn as well. This has led to setting up a new group called the ‘Phoenix Open Faith Community’ because the group of us that worship and meet together, enjoy the experience of the Divine through many means.

We are beginning to realise that putting God in a box only leads to restrictive and often destructive attitudes. How many of us have experienced the Divine and yet never go to places of corporate worship?

Probably a large percentage and at the Phoenix Community we enjoy engaging with people of all spiritual journeys and backgrounds. We have a group of all genders, all ages, all backgrounds, all beliefs and all sexualities and we aim to learn from one another and our spiritual journeys. No one has to dilute their beliefs; we just know how much we can learn from one another, if only we listen with openness.