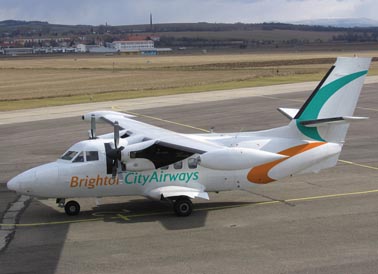 A new airline, Brighton City Airways has been launched to fly twice-daily scheduled flights to Paris from Shoreham in Sussex. Shoreham Airpot has been renamed Brighton (Shoreham) Airport to celebrate the new service. Tickets went on sales from December 1, with the first flights departing on March 6, 2013.

The airline will fly into Paris Pointoise airport, which is close to central Paris, allowing passengers to reach the city centre within two hours of parking at Shoreham. Tickets cost from £69 one way, including taxes and charges

Neil Laughton one of the two Sussex-based aviation experts, who have founded the airline, said:

“This is the perfect Christmas present for someone who wants a new and special experience – flying one-hour to Paris in the spring!” said Neil Laughton, one of the two Sussex-based aviation experts, who have founded the airline.

“This has long-term benefits for the local community too as there are many businesses in Sussex who can use this service on a regular basis and holiday makers or Paris day trippers can also make the most of travelling to and from Shoreham’s charming airport, where parking is easy and check in to take off takes just minutes.”

Special features of the airline include a 15 minute check-in, no hidden fees, VIP lounge and service, easy local parking and the flight, which is in a 19-seat Let 410 commuter aircraft, takes one hour to reach Paris. Pontoise Airport is also conveniently close to La Defense Business District of Paris, which is just 22 miles away.

“I am delighted to see cross channel flights returning to Shoreham again. Shoreham Airport has a lot to offer as a base for short hop trips to the Continent with a large market of travellers on its doorstep who otherwise have to spend more time travelling to and through the London airports than in the air. I wish the new operators well and hope this is the start of big things to come.”

“This is absolutely what we want to see at the airport, scheduled international travel bringing lots of people through our historic airport, which was the first licensed airfield in Britain. This has prompted us to rename the airport Brighton (Shoreham) Airport, to link it properly to our neighbouring city.”

Jonathan and Neil met when Neil approached Flying Time Aviation four years ago, asking for lessons to help him fly the world’s first ‘road legal flying car’. They became friends, agreeing that a partnership to introduce a desirable European route from the south coast would make good business and benefit Sussex.

Neil Laughton, who lives in Small Dole, a few miles from Shoreham, is the Founder and CEO of the Business Leadership Academy in London, an organisation dedicated to improving the leadership and management skills of business executives. He also leads New Horizons, a youth development project for disadvantaged young people in the UK and is a Non-Executive Director and Business Angel Investor.

He started his career as a Royal Marine commando, then completed a post-graduate business diploma before founding the design, build and furniture company OPL Group, which he sold to Balfour Beatty Plc when turnover reached £40m in 2009.

In his spare time he has undertaken many challenging expeditions and has completed the Explorers Grand Slam – climbing the highest mountain on each continent and skiing to North and South Poles. In January this year, he led a team of business executives to the South Pole to commemorate Captain Scott’s achievements exactly 100 years earlier and organised the first game of cricket on arrival in minus 35 degrees centigrade.

Jonathan Candelon, who also lives in Sussex, is a seasoned career pilot, who grew up in Venezuela and Haywards Heath. He has built up Flying Time Aviation to become one of the top career pilot schools in the country.

He now runs a team of quality pilot trainers, with a large fleet of training aircraft and flight simulators at Shoreham (Brighton City) Airport, as well as training students himself, helping to qualify dozens of new career pilots every year.

Flights to Paris in the spring can be booked straight away with a £20 deposit and the rest of payment is only required two weeks before the flight date, with the opportunity to change names on the tickets then for no charge. Passengers are advised to book early to benefit from the best prices.