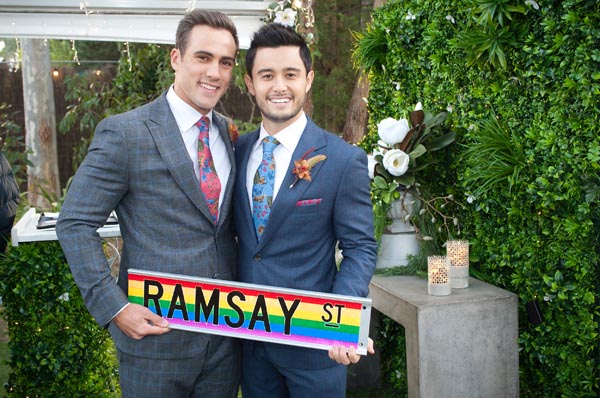 Newly released pictures give fans a glimpse of Aaron and David’s upcoming nuptials on Neighbours.

Newly released images show Aaron and David at their wedding ceremony, joined by Australian actress and LGBT+ rights activist Magda Szubanski who officiated the wedding. This historic moment will be the first same-sex wedding on an Australian TV show after same-sex marriage was legalised in Australia in December 2017.

Speaking about their characters’ recent nuptials, Matt Wilson said: “We are both ecstatic to be part of this huge moment in Australian television and it stands alone as the highlight of my career. This storyline means a lot to me, to my friends and to all the fans we hear from on a daily basis here and in the UK who love Aaron and David”.

Takaya Honda added: “It is an absolute privilege to be a part of what is and will be a historic moment in Australian television. There have been so many parts of David’s story that have given me a great sense of pride and which have been an absolute honour to portray; from discovering Paul was his dad, to his coming out to now marrying the man of his dreams in what will be the first legal gay wedding on a drama.”

Neighbours’ Executive Producer, Jason Herbison said: “This is a story that we have been working on for a long time, and during that time, our country was trapped in a divisive referendum. Would our story about love and equality even be legal by the time it aired?  Thankfully love won and we’re very excited for viewers to see this iconic moment come to life on-screen.”