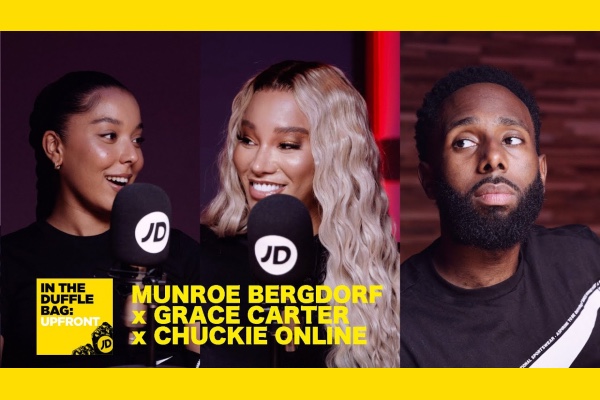 British trangender model Munroe Bergdorf and singer-songwriter Grace Carter have spoken to Chuckie Online on JD’s In the Duffle Bag: Upfront podcast about their experiences with race.

Bergdorf and Carter joined Chuckie to speak upfront about their own experiences and the issues BAME people face living in the UK.

Reflecting on a recent and high-profile incident, Bergdorf admits she felt ‘a sense of vindication’ from L’Oréal after the cosmetics company re-hired her onto their diversity inclusion board in June.

Whereas Carter explained her issues were much closer to home; after being born to mixed-race parents, the now-23-year-old was raised by her white mum, leaving her initially unaware of the black side of her family. It was only when someone from school asked her if she was adopted that she began to question her identity.

Munroe Bergdorf was born in Essex in 1987 and is a model and activist; speaking about the L’Oreal incident, she said: ‘It did feel like a sense of vindication, but when I saw L’Oreal post the black square I did just think nuh huh, this is good that you did this getting behind Black Lives Matter but at the same time you hadn’t made right what had happened with me.

‘I think black people are always meant to be nice and calm about racism; it’s not great, it’s awful to experience and honestly that’s gaslighting – expecting us to be chirpier about something that holds us back and is detrimental throughout our entire lifetime.’

L’Oréal’s current president Delphie Viguier reached out and personally apologised to London and New York Fashion Week model Bergdorf for the company’s previous actions, something which she didn’t think would happen: ‘I ended up getting on a Zoom call with the current president; it really felt very different to how I expected it to be, I never thought that that situation would happen.

‘I thought of them as a really big corporation and very cold, to get on the call with the head of L’Oréal and have a women-to-women conversation, person-to-person, human-to-human conversation just felt mind-blowing to me because I could tell she genuinely wanted change but L’Oréal is a huge corporation it doesn’t just change overnight.

‘I could tell that there was the will to do better and she said will you come on-board as part of our diversity inclusion board and help us get better and help us be more inclusive and reduce oversight.

‘At the beginning, I was like I don’t want to work with these people that caused me so much stress; then I thought this is my job, I am constantly holding white people and white institutions to account – you need to do this you need to be better.

‘When a corporation turns around and is like will you help us do better, I feel like it’s my duty to do it.’

Carter also spoke candidly to Chuckie about some of the challenges she has faced in her life due to the colour of her skin.

Carter, who rose to prominence after she supported Dua Lipa on tour, admitted that her problems were a lot closer to home, she said: ‘I was born to a single parent, I grew up with just the white side of my family – I had no real connection to the black side of my family at all – my identity is a massive thing for me.

‘I moved to Brighton when I was nine, the first week my mum got me from school, a kid turned to me and asked if I was adopted – that was the day for me when everything unfolded.’

Carter revealed that while she didn’t see her Dad regularly growing up, she had got to a point where she ‘was fine and could cope without him’.

After Carter released her first song, Silence, she realised she’d been kept a secret from her Dad’s side of the family, who were black, by her Mum: ‘I released that song and it became very clear that none of them knew I existed; I was a secret from the whole black side of my family until I started releasing music.

‘As well as the world waking up to you gradually, I was also dealing with family being like I’m your Auntie, I’m your Cousin.

‘I always wanted that in my life because obviously that was a part of me that was missing and never had the answers to my blackness – they were the people that were that to me but then at the time that it happened it was a lot to deal with.’

Bergdorf also revealed to the podcast the pain and loneliness she had suffered growing up, feeling like she had no one who she could relate to: ‘I was bullied relentlessly, I went to an all-boys school, it was hellish.

‘I felt like I was being set up throughout my entire childhood and Jeremy Beadle was going to jump out and be like ‘gotcha, we’re actually going to take you to the good place now’.

‘I didn’t have anyone, honestly, I had no one (and) I think this is why a lot of people are like where do you get your strength from?

‘I think when you had no one and nothing, (and) you are the only one who can get you out of it, then you lift yourself up and know how to give yourself self-love, you know how to be there for yourself in a way that a lot of people don’t.’

In the Duffle Bag: Upfront:
Across the series, Chuckie will be discussing British black experience, covering everything from people’s childhoods to the challenges of getting into certain industries based on race. Not only that, he’ll be getting the low down on what’s inspiring people right now. Sharing where we can go to find hope and positivity.
Listen to them here: In the Duffle Bag: Upfront