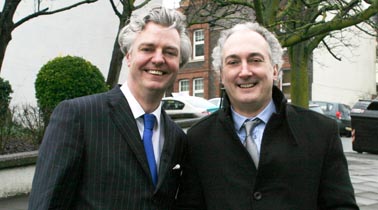 Both local Conservative MPs, Mike Weatherley, the MP for Hove and Portslade and Simon Kirby, MP for Portslade & Peacehaven are calling on all residents in Brighton & Hove to get tested during England’s first National HIV Testing Week.

The aim of HIV testing week is to:

HIV Testing Week runs from November 23-30, ahead of World Aids Day on December 1.

Last year, Mike took a rapid HIV test in Parliament on World Aids Day to raise awareness of the need for early diagnosis of HIV.

The number of new HIV cases in Brighton & Hove has been rising, with almost 2,000 people treated last year compared to 758 in 2001 and, for the first time ever, more than half of the new cases were caught through heterosexual sex.

“Given that instances of HIV are rising in Brighton & Hove, it is more important than ever for both gay and straight residents of the city to get tested. Up to a quarter of people living with HIV in the UK do not know that they have it, so increasing testing and reducing the stigma attached to it will help reduce this figure.”

“Currently one in four people living with HIV in the UK are undiagnosed, meaning there are more than 22,000 people living in the UK who do not know that they have the virus. This has serious implications for individuals concerns and for wider public health.

“HIV Testing Week gives us an opportunity to send out the clear message that testing is the cornerstone of the fight against HIV, and that by increasing testing amongst at risk groups we can go a long way to saving lives and reducing infection rates.

“This is an especially important issue in my constituency, as Brighton Kemptown has  a large population of gay men which is one of the groups most at risk. I will be doing what I can this week to raise awareness of the importance HIV testing, and I would urge all of my constituents to heed the message and spread the word”