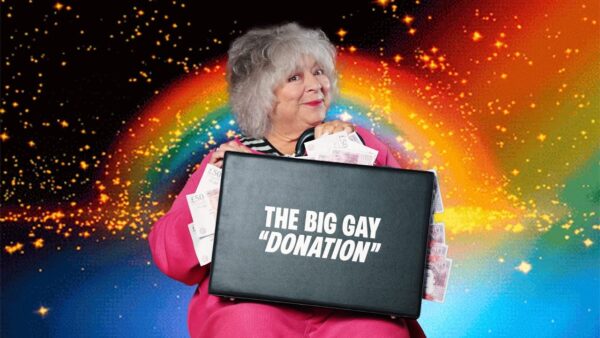 Outspoken actress and political activist Miriam Margolyes has teamed up with LGBTQ+ charity Stonewall ahead of the World Cup final in anti-LGBTQ+ Qatar this Sunday.

Margoyles can be seen in a video appealing for The Big Gay “Donation” with the aim of getting people to donate to have the 2030 World Cup held in a LGBTQ+ friendly host country.

The star explains in the clip: “Queer people across the globe love football – we just can’t support it like everyone else. We’ve seen how Qatar feels about us gays.

“If that wasn’t a big enough kick in the tits, the 2030 World Cup could be given to another host nation that criminalises LGBTQ+ people, judging by the countries currently bidding for it.”

She then suggests the idea of crowdfunding to raise money that could convince those in charge of deciding where future World Cups are held to see the light.

The actress is then seen on the phone asking how much money the powers that be may want to help make this happen – she even suggests the next host nation could be The Netherlands – as she flashes a wad of cash to get their attention.

Margolyes added: “It’s our big gay duty to make sure this doesn’t happen again. After all, a World Cup without queer people just isn’t a World Cup. If you’re a great big gay and you love football like me, or if you love football and also gays, please donate whatever you can to try get those naughty boys who run football to listen.”

Liz Ward, Stonewall Director of Programmes, said: “All LGBTQ+ people deserve to live their lives to the full, to travel freely without fear, and to be part of global sporting events like the World Cup.

“Thank you to Miriam Margolyes and to everyone that is taking a stand for LGBTQ+ inclusion and freedom.”