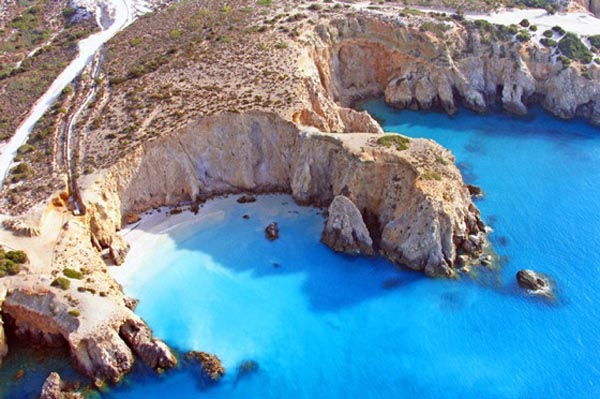 Going to a Greek Island is like taking drugs, once you start you can’t stop, you have to keep going back to experience another one, says Roger Wheeler.

Mike and I have been regular visitors to the Cyclades archipelago for several years. There are about 300 inhabited Greek Islands and they are all quite different.

The name Cyclades refers to islands forming a circle around the sacred island of Delos and according to Greek mythology, Poseidon, God of the sea, furious at the Cyclades nymphs, turned them into islands. Possibly the most famous of this group is Mykonos but there are about 20 others that are rarely visited.

We were invited to see Milos so we flew to Santorini, took the fast ferry and were so very pleased that we did.

Milos is a small island with just about 5,000 inhabitants. The port town is  Adamantas where most tourist hotels and restaurants are, but the chief town is Plaka, perched on top of what they call a large rock, to us it looked like a small mountain. It’s an ancient village, the streets are so narrow no cars can get in and surprisingly there are not too many tourist shops.

On these islands you will find stunning views around every corner, Milos is no exception. There are few roads on the island so if you want to see some of the best beaches and the most beautiful villages hiring a car is essential as there is little public transport.

Our first two nights were spent on the very quiet southern coast at The Golden Milos Beach Hotel at Provatas, right on a sandy beach, an uncomplicated and really lovely hotel. We were there in September when the sea was so warm we didn’t want to get out.

Our last two nights were spent at the Miland Suites Hotel, set on a hill overlooking the harbour and bay in Adamas.  There is only one word to describe this hotel and that is ‘wow’. The phrase boutique hotel is sometimes overused, but not in this case. This small eight room hotel was quite stunning and run by a very friendly family. Mama brings cups of lemon tea and lovely fruit punches whilst you’re lying around the pool under billowing canopies.  The rooms are really suites with small terraces, dressing/sitting rooms as well as a large bathroom and obligatory huge bed.

To make our stay even more interesting we were invited to a day long cruise on a large catamaran. Not being particularly good sailors we were in two minds until we saw the crew – two very personable, attractive, young Greek sailors, any doubts we had vanished. It was one of the best days we have ever spent on holiday, idyllic is the only word to describe it and were joined by a small group of, very well-travelled, Americans who were great fun to spend some time with.

We sailed around the enormous bay, moored in a deserted cove, swam around the boat whilst the boys who turned out to be cousins, cooked a wonderful lunch of freshly caught octopus and served us lots of local wine.  This trip is simply a must do if you ever get to Milos.

Milos is quite different from any other islands we have visited. The coastline is rugged with hundreds of bays and inlets plus 70 beaches and, no surprise, one of them is gay!

The Greeks love this island to the extent that unusually for such a small island there is an airport with regular flights from Athens, allowing the current Prime Minister, Mr Tsipras, who is a regular visitor, to be able to fly down to his house on the Island. Although the Greek financial crisis is well documented, this group of islands have been enjoying a boom time, the tourist industry is flourishing and the local economy is strong.

Milos has many claims to fame, apart from being where they found the statue of Aphrodite (the Venus de Milo now in the Louvre in Paris) it also has the world’s largest deposits of Perlite, used for, amongst other things, cat litter and Bentonite which is essential for the mining and drilling industry.  About 25% of Milos is owned by a mining company (Mining Greece) that ships these minerals all over the world. Milos is very fortunate to be the only Greek island with some serious industry.

We would have loved to be able to spend more time exploring Milos and will one day definitely go back, but we were on our way to Sifnos and that was yet another surprise.