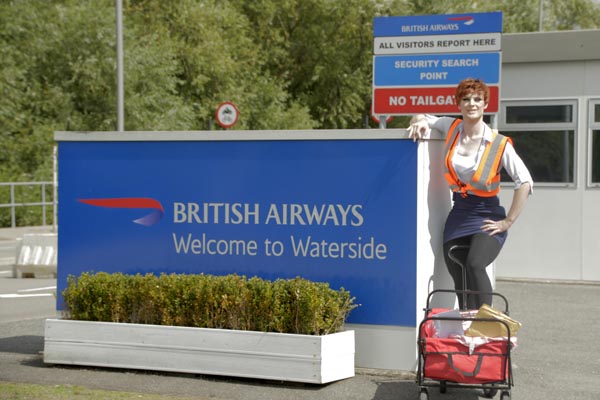 Lesbians & Gays Support the Migrants (LGSMigrants) celebrate BA’s 100th birthday with a drag video, a protest at Heathrow airport, an ad hack in partnership with Protest Stencil, and by publishing 100 letters asking BA to end their deportation contracts.

To celebrate their 100th birthday, BA are running a huge advertising campaign, including 100 ‘love-letters’ to Britain from staff, celebrities, and the public. To mark the centenary, LGSMigrants have assembled their own 100 letters calling on BA to stop deportations. These #DearBA letters showcase other voices – including migrants, BA staff, and BA customers – and demonstrate the wide opposition to deportations.

The 100 letters campaign includes letters from migrant groups such as African Rainbow Family, Hackney Migrant Centre, Community Action for Refugees and Asylum Seekers and Praxis; politicians including MPs David Lammy and Lloyd Russel-Moyle; Mercury-Prize nominated Cassie Kinoshi, riot grrrl band Big Joanie, novelist Sebastian Barry, comedians Francesca Martinez and Derry Girls star Siobhán McSweeney, drag artist Asifa Lahore, poets Sabrina Mahfouz, Richard Scott and Andrew McMillan, and even a letter in polari (the secret language used by gay men in the 1960s) by artists George Reinder and Penny Burke. The campaign has also been supported by a former BA staff member and a current member of staff, whose letters have been published in The Independent. LGSMigrants started publishing the letters in early August and published the last ones over the weekend.

LGSMigrants released a video of drag queen Helvetica Bold dressed as a postal worker trying to deliver the letters to BA’s headquarters. Sadly no representative from BA agreed to meet Helvetica Bold to receive the letters.

In another attempt to deliver these #DearBA letters, LGSMigrants went to Terminal 5 at Heathrow airport on BA’s birthday, Sunday, August 25, to give out flyers, featuring the letters and information on deportations, in the entrance hall and perform a public reading of the letters outside the building.

At the same time, Protest Stencil, who have previously hacked hundreds of London transport adverts as a form of activism, hacked a bus stop on the Southbank publicising their own #DearBA letter.

In his letter David Lammy MP wrote: “In its centenary year, the question our national carrier faces is whether it wishes to truly represent ‘the best of all things of British’- of British fairness, morality and due process and end its part in deportation flights, or whether it will continue to play its part in this shameful process. I would strongly urge British Airways to choose the former.”

Members of Survivors Speak Out wrote: “People are escaping fire in their country of origin to seek safety but, unfortunately they are being sent back to die from the same fire by the UK Home Office with the complicity of British Airways.”

A current member of BA’s staff wrote: “Instead of deporting migrants and refugees, we could be joining Virgin Atlantic, one of our main competitors, in ending forced deportations from the UK. Our airline could help those fighting for positive change in the world and stand with those seeking freedom from brutality and persecution by ending forced deportations. We could celebrate those who seek to live their true lives peacefully with us. Please let us end forced deportations and live the values that we seek to celebrate.”

The band Big Joanie wrote: “Our band, Big Joanie, are descendants of Caribbean and African migrants, our community has been scarred by the stories of people in our community forcibly removed and deported for nothing more than an error by the Home Office. You are not an ally to our community as long as you enable forced deportations. We ask that you cease this immediately and join others in refusing to participate in a merciless and heartless practice.”

One British Airways customer wrote: “Before this [campaign], I did not know you facilitated deportations. I have travelled with you before, and enjoyed the experience, but I cannot in good conscience do this again for as long as you support this unjust practice.”

In 2017, activists from LGSMigrants and other groups made headlines by grounding a charter deportation flight from Stansted airport. The government continues to charter planes specifically to deport groups of vulnerable migrants, but also deports individuals on commercial passenger flights through contracts with airlines like British Airways. BA has been responsible for carrying countless deportees, and several years ago, an Angolan passenger, Jimmy Mubenga, died on a BA deportation flight.

With this letter campaign, LGSMigrants are increasing the pressure on BA, following a series of actions including an ad hack on the London Underground, a Tinder bot placed at airports, the disruption of an Airlines UK industry dinner and the launch of the British Airways exhibition at the Saatchi Gallery.

After pressure from LGSMigrants and others, Virgin Atlantic cancelled their contract for deportations with the Home Office in 2018. Now the group are calling on BA and other airlines to follow suit.

LGSMigrants spokesperson Sam Björn said: “We don’t know what British values BA think they’re celebrating with this centenary campaign, but we won’t let them whitewash their legacy of supporting the racist hostile environment and enabling the Windrush scandal by claiming to embody them.”

LGSMigrants are calling the public to tweet BA with #DearBA asking them to end their deportation contracts.

To read the 100 letters published by LGSMigrants, click here: