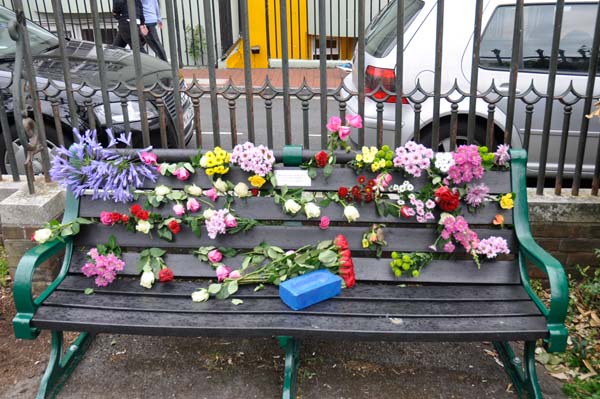 Friends and colleagues of Michael ‘Mouse’ Burton and Gary ‘Gloria’ Swan gathered under cloudy skies in New Steine Gardens, on Sunday (July 23) to dedicate two memorial benches in both their names.

Both Michael and Gary who died unexpectedly towards the end of 2016 were very popular on the commercial LGBT+ scene, having worked at different times over the years at Revenge, Bar Revenge, Legends, The Star and Charles Street.

Friends decided that they would like to do something in their memory and Revenge, Bar Revenge, Queens Arms, Charles Street and Legends staged a weekend of fundraising to pay for two benches to be installed in New Steine Gardens, home to the Brighton Aids Memorial.

A partnership of LGBT+ venues including Revenge, Bar Revenge, Charles Street, Legends and Queens Arms came together at the end of March for a Unity Fundraising Weekend, raising £2,186.30 to purchase two memorial benches in memory of their former employees.

Chris Marshall and Andrew Roberts the general managers of Charles Street and Revenge respectively spoke on behalf of the community.

Phil Callaway responded on behalf of Mouse and Ian Swan, spoke on behalf of his brother Gloria before everyone present raised a glass of bubbly in memory of them both to the music of Simply the Best by Tina Turner.

Sound and gazebo for the event were provided and assembled by the volunteers of the Brighton & Hove, LGBT Community Safety Forum.