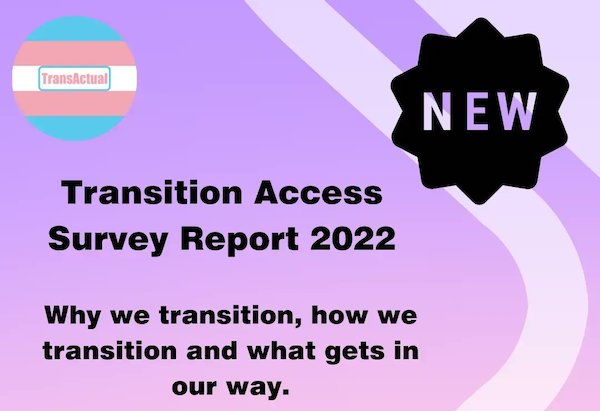 TransActual UK has published major new research – the Transition Access Survey 2022 – which shines a light on how “the NHS is failing trans people on an industrial scale”.

According to Chay Brown, Director of Operations for TransActual: “The picture drawn is one of pain, distress and heartbreak, as trans people increasingly find their access to life-saving treatment blocked for a host of bad reasons.

“These include lack of resources, transphobic practitioners, and an officious and bureaucratic system of gate-keeping that seems designed around disbelieving trans people, far more than enabling very necessary treatment.”

The report reveals that timely and well-supported access to treatment can be a life-saver.

According to one transfeminine respondent: “It saved my life. It stopped me from [committing] suicide. If I hadn’t been able to access it, I wouldn’t be alive right now.”

Respondents were clear that the impact of transition went far beyond the simple physical. Many trans people – particularly on the feminine spectrum – reported feeling safer leaving the house, with reduced instances of harassment or abuse common following HRT or surgery.

Despite this, there was widespread evidence of increased waiting times across the sector. Historic wait times for a first appointment (itself, months or years away from any treatment) range from four to five years. However, forecasts suggest ten year waits are already built into the system.

The report reveals individuals putting lives on hold, due to inability to plan, and as a result, increased issues with mental health. In addition, inability to transition through the NHS was leading individuals to pursue less safe pathways, from prolonged binding to purchase of HRT from unregulated suppliers on the internet.

This came from one agender respondent: “I can’t make long-term plans because I honestly am not sure that I will survive the next however many years before I can access surgery, that is how unbearable it is to wait.”

In 2015, the House of Commons’ Women and Equalities Committee Select Inquiry on Transgender Equality, reported that “the NHS is letting down trans people”.

Trans Actual UK adds: “The picture provided by the report suggests that the situation is not improving, but getting a lot worse.”