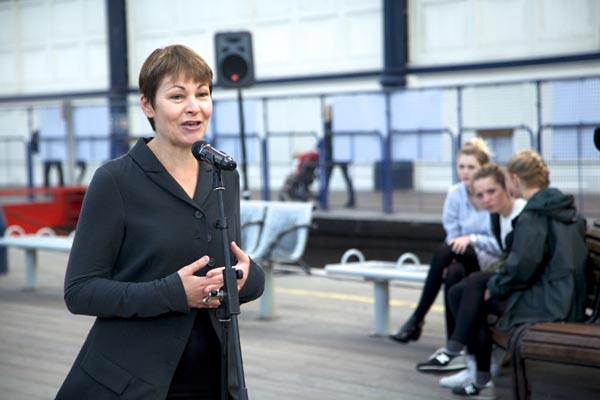 CAROLINE Lucas, MP for Brighton Pavilion, joined the talks with the Rail Minister and train bosses yesterday, calling for urgent improvements to services.

Caroline called for a rail summit last month amid further fare hikes and continued disruptions for passengers across the South East.

Presently she says passengers are being routinely failed twice over – through delayed trains and pitiful, convoluted compensation systems.

At the meeting Caroline presented passengers’ concerns and pressed for service improvements and a renegotiated compensation system.

She was particulary concerned at the small sums being paid out to passengers in compensation. According to the Transport Salaried Staff Association (TSSA) report, last year operators pocketed £167m from Network Rail for delays, passing on a mere £22m to passengers.

Compensation is now payable where a train is more than 30 minutes late, but complex processes and lack of information mean just a tiny proportion of people are claiming money back.

A 2013 Passenger Focus survey found that just 12 per cent of those eligible for compensation claimed it.

Caroline also highlighted repeated delays: a train, she noted, could be routinely delayed by 25 minutes, and passengers wouldn’t see a penny. Rail companies must be made to pay out for repeated disruption, she said.

Caroline said: “It’s time rail bosses were held responsible for the services we depend on.  Passengers are being routinely failed and we need urgent improvements to ensure smoother-running railways.

“The compensation systems are woefully inadequate and needlessly complex. When delays and cancellations do happen, passengers must be swiftly and fully compensated. That isn’t happening – we need to simplify the system and hold operators to account to ensure a significant proportion of those funds are passed on to passengers.”

In particular, Caroline called on rail bosses to consider greater compensation during periods of ongoing disruption, such as that being experienced as a result of developments at London Bridge, as well as much better communication to passengers about their rights to compensation.

She added: “The extension of so-called ‘enhanced compensation’ to Southern trains is welcome, but passengers should be eligible for much shorter periods of delays if they are of a repeated nature.  Train operators must also be obliged to make announcements both on the train and at the station about passengers’ rights, and make it far easier to claim.”

Caroline said:  “Yesterday Network Rail and the rail companies were asked to explain themselves – it’s crucial they’re held to account. We’ve taken a solid step forward, but we need to see much greater action taken to improve the situation, and I’ll be following it up very closely.”