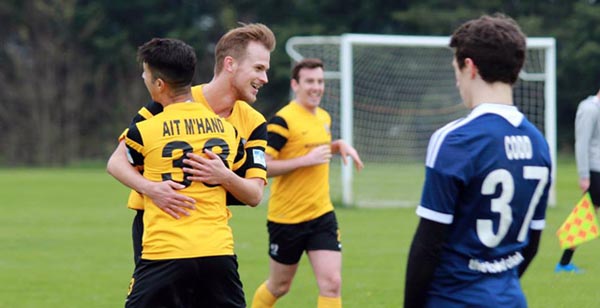 London Titans FC will hold an auction on Sunday, December 11 at The Two Brewers, Clapham, with all proceeds being donated to the Terrence Higgins Trust (THT), the UK’s leading charity addressing HIV and sexual health.

London Titans FC is one of the UK’s most prominent and successful LGBT football clubs. Based in SW London, the club prides itself on offering a safe and stimulating place for LGBT individuals to play football without fear of homophobia or outdated attitudes. Playing across multiple leagues, at a national and local level, Titans also connect with the wider international footballing community, most recently participating in the 2016 Eurogames in Helsinki, and they will be sending two teams to the 2017 Outgames in Miami.

Alongside the football, London Titans FC is a strong advocate of community connection and charitable donation, holding a dedicated monthly club night, Ball, to raise funds for charities which support and engage with the LGBT community. This year the club’s annual Christmas Ball and charity fundraiser is an auction and prize raffle in support of the THT.

The crowd will be able to bid on high-ticket prizes including 2 x The Bodyguard tickets, a Kurt Geiger handbag, Jeans donated by HRH Victoria Beckham, Andrew Logan jewellery, a Pretty Green jacket, Be Here Now CD and Supersonic DVD signed by Liam Gallagher, and a £100 Wagamama voucher.

For sports fans, the auction will also include a piece of LGBT history in the form of a signed football shirt donated by Robbie Rogers, the most prominent out gay footballer, currently playing for LA Galaxy. London Titans FC’s official club partners have also donated a shirt signed by the entire QPR squad, especially for the auction.

For the theatre lover in your life, the auction and raffle will include 2 x tickets to a selection of London’s hottest upcoming shows and performers across the West End and queer circuit, including Boys in the Band, F*cking Men, Le Gateau Chocolat and Camp NYE with Scottee.

For those who like a cute night in, the raffle will include champagne, a signed Rustie Lee cookbook, and a range of LGBT films donated by Peccadillo Pictures. For those who prefer something altogether less well-behaved, a bottle of OurLondon Vodka, a signed copy of Matthew Todd’s Straight Jacket, and a selection of Tom of Finland sex toys donated by Bondara will be up for grabs.

A framed queer print courtesy of Greenhead Design will also be available, alongside a 2017 Pecs and Pups Calendar, 2 x 30 minute treatments at the LG waxing lab, some Elton John memorabilia, and 2 x cinema tickets to the Ritzy Brixton.

The auction and raffle will be held from 6.30pm on Sunday, December 11 at The Two Brewers, Clapham. The night will feature performances from Miss Jason, Mary Mac and Sandra, with all proceeds going to the THT.

♦ 2 x Boys in the Band tickets