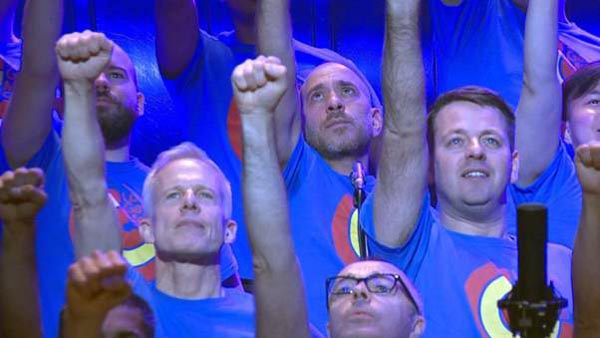 Saar is a gay man from a religious family in Israel. After being kicked out of his conservative kibbutz because of his sexual orientation, Saar flees to London where he enjoys a gay lifestyle denied to him in Israel. He lives the dream, but wakes up to a nightmare when he discovers that he has contracted HIV.

When he breaks the news to his family, they struggle with fears and prejudices. With the support and warmth of Saar’s surrogate brothers – the London Gay Men’s Chorus – he begins a reconciliation process with his biological family in Israel.

Saar finds himself torn between the two worlds and must make a decision: should he return to Israel and embrace his family once more, or stay in London and live in exile forever.

Saar and the rest of the London Gay Men’s Chorus provide a glorious soundtrack for this tender, honest and intimate film by acclaimed directors Barak Heymann and Tomer Heymann (Mr. Gaga, Paper Dolls and I Shot My Love). Shot over several years, this documentary is about the power of forgiveness and the power that home has, no matter how far we go.

Who’s Gonna Love Me Now? was supported by the BFI Film Fund and in Official Selection at BFI London Film Festival 2016.

To watch the film on BFI Player, click here: