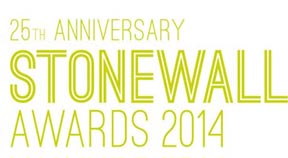 Stonewall announce the first round of nominees for the ninth annual Stonewall Awards taking place on Thursday, November 6 at the V&A London.

THE AWARDS celebrate the positive contribution of individuals and organisations to improving the lives of lesbian, gay, bisexual and trans people.

Ade Adepitan, whose work on Unreported World highlighted the plight of LGBT people in Jamaica is nominated for Journalist of the Year alongside the BBC’s Jane Hill, Liz Mackean whose Dispatches documentary Hunted shone on a light on gay-bashing in Russia. Other nominees for Journalist of the Year are Patrick McAleenan of the Daily Telegraph and local writer, Paul Thorn whose columns document lives of people with HIV with humour and humility.

Paul, who lives in Brighton, has been HIV-positive for 27 years. He nearly died in 1995, but new antiretroviral therapy saved his life. For many years he has worked as an advocacy and communication consultant for numerous international humanitarian and official bodies. He is the published author of three books and is widely credited for being responsible for the USA lifting the ban on HIV-positive people being able to enter the country. He has been GT (Gay Times) magazine’s HIV writer for over ten years. His column was dropped just a week before Paul’s nomination by Stonewall.

He said: “Of course I was very disappointed to learn that my column is being axed, but then to learn only a week later that I have been nominated for this award my disappointment turned to surprise. It has been a bit of a rollercoaster recently.”

The column itself is upbeat, always encouraging the reader to grasp the second chance at life that antiretroviral therapy can give people. It offers practical advice to surviving with HIV and getting on with life. Although the column is now homeless Paul is currently writing two new books.

Paul continued: “I nearly gave up writing completely. This nomination has inspired me to keep going and push ahead. Clearly some people value what I do. I have always been a survivor, and my writing career must be no different.”

The 2014 Hero of the Year nominees are Tom Daley, nominated for his brave coming out video released in December 2013, Vicky Beeching, who spoke movingly about her battle to reconcile her faith and sexuality, Pepe Julian Onziema whose activism as a trans man in Uganda in the face of threats of violence and abuse inspires millions around the world. Hollywood actress Ellen Page is nominated for her deeply moving coming out speech and Tim Sigsworth, Chief Executive of the Albert Kennedy Trust is nominated for his tireless work to support homeless LGBT people.

The nominees for Advert of the Year include Moss Bros, whose equal marriage campaign promoted smart suits for the first same-sex weddings, Southbank Centre whose summer Festival of Love celebrated commitment regardless of gender, Spotify who created a touching advert featuring two love struck male teenagers, Barclays and London LGBT Community Pride whose #FreedomTo campaign adorned buses, bikes and banks throughout the summer and Cornetto who produced an online short film that followed the unexpected love story of a tennis star and ball girl with a special guest cameo from Lily Allen.

Stonewall Chief Executive Ruth Hunt, said: “Every single nominee for the 2014 Stonewall Awards shows how individuals and organisations can change the world through their words and actions. In 2014, Stonewall’s 25th anniversary year, it’s important to take a moment to reflect on the remarkable things we can achieve when we work together as a community. Here in Britain and around the world we need campaigners and advocates as much today as we ever have to make the world a better place for LGBT people. The Awards are our chance to thank those who are making this change a reality.”
To purchase tickets for the Stonewall Awards on November 6, CLICK HERE: