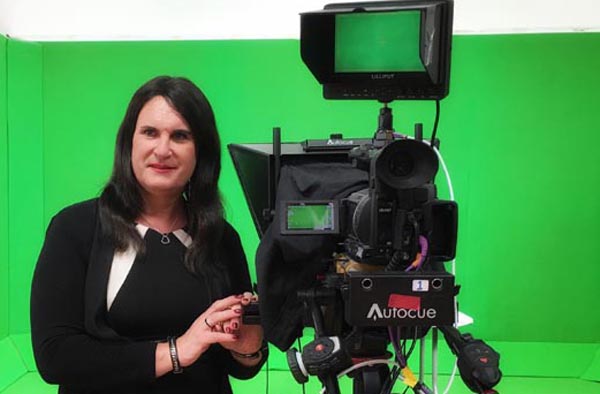 Latest TV the local community TV channel has appointed trans activist, Sophie Cook as an on-screen Newscaster and Head of Diversity at the Brighton based TV station.

Sophie Cook becomes the first ever transgender news anchor in the UK and Europe.

Latest TV’s CEO, Bill Smith, says: “Brighton is an island of sanity in what can often be seen as an ocean of intolerance. Latest TV brought the first exclusively LGBT show to terrestrial television, Q Tube, and now we are appointing Sophie Cook to lead the LGBT TV news revolution!”

Speaking about her new role, Sophie, said: “It’s a great honour for me to be given this opportunity by Latest TV and is a real step forward for transgender visibility and awareness. Brighton & Hove is a unique city, full of amazing diversity and I’m proud to be able to reflect this by bringing the news to everyone in the city on Freeview channel 7 and Virgin Media 159 and across the world through www.thelatest.co.uk.”

Last summer, when coming out as transgender to her club, AFC Bournemouth, she feared that she would lose everything but the club and the fans were great and now Sophie talks at conferences nationwide including speaking at Wembley Stadium about these fears and how she overcame them.

With Latest TV, she is currently making a documentary about football versus homophobia.

Sophie is a keen advocate of fighting the stigma around mental health and as well as struggling with her gender dysphoria also suffered with post-traumatic stress after saving a colleague’s life whilst serving in the Royal Air Force.

Sophie is the patron of a number of charities including Just A Ball Game? and the LGB&T Dorset Equality Network, as well as being a Stonewall Schools Role Model, and a Hate Crime Ambassador for Sussex Police. She also has a long association with rock band The Libertines, having photographed them for nearly a decade.